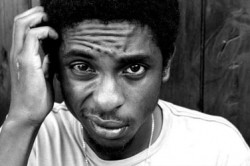 The economy is in the toilet. The automobile industry is in turmoil. An unpopular war continues in Iraq. However, rapper Shwayze pays no attention to the top stories. He and his right hand man, DJ Cisco Adler, ignore what's going on. Shwayze raps about what he knows, which is his beloved cannabis ("Lazy Days"), beer ("Corona and Lime") and babes ("Roamin'"). The laid-back tunes reflect his enviable Malibu 'hood. In a recent phone interview, Shwayze spoke about his eponymous debut disc, sexy L.A. scenesters and what it's like to be the only black dude in white-bread Malibu.

The album is pretty lightweight when it comes to the subjects you rap about.

Yeah. I don't need to get into the heavy stuff. There's other stuff to think about. You don't have to get bummed out.

This album is definitely a postcard from home. It's a reflection of me. It's what I needed to do. This is where I need to be in life.

You went to San Diego Community College for about three minutes, right?

I barely lasted a semester. I was partying so much that I didn't complete a credit. I just went back to Malibu.

How did you hook up with Cisco?

It was a pretty organic thing. He [saw me freestyling] and was like, "I like your shit." That was cool. I knew about Cisco for a long time since we're both from Malibu, which is a really small town. The funny thing is that I knew of him as a rock dude. But then I heard he was into rap as well. We connected and we're here together. Cisco is a genius. There's no debating that. He lays down the sounds and it just works. I'm so lucky that we connected because we have a special thing going on.

Cisco has gone out with some of the hottest babes in Hollywood. You've gone out with Paris Hilton, Lauren Conrad and Mischa Barton. Do babes dig the album?

They like it because you just pop this disc in and chill out. Who wouldn't like that?

You guys were probably the most laid-back act on the Warped tour.

I loved the Warped tour. It was an awesome experience. It was the first time I've been on a national tour. I saw how amazing playing out can be. I feel like I've been through it. I'm ready for anything now. I've got that experience now.

Your MTV reality show Buzzin' was kinda fun. Is it going to be back?

That was fun, but I don't think it's going to be back. I got used to the cameras, but they were always there. I would wake up and my hair would be all nappy. I had to live with the bad look since there is no place to hide on a show like that. But Cisco and I aren't going to worry about reality television. Our thing is going to be music. That's what we do best. That's something that can't be argued.

What's amazing is your rise from obscurity.

I'm proof that anyone can go from nowhere to somewhere. Last year, I was working at a Starbucks hoping and dreaming of getting somewhere. Now it's happening for me. I feel like if you stay positive and keep working hard, things will work out.

Where do you take it from here?

I just want to become a better musician. I love rapping but there's more to it than that. I want to be an artist. I want to produce and write for other people. I want to expand my game.

I heard that the South Park guys named the character Token after you? True or false?

It's all true. I met them at a party and told them my story. I told them the story that I'm the only black dude in Malibu. So, I'm so many people's only black friend. They thought it was really funny. So I got an e-mail from someone from the show, and I was told that they're dedicating the character Token to me. How wild is that?