Culture Jamming: Return Of The Mutha'uckas

Flight Of The Conchords Tops This Week's Picks 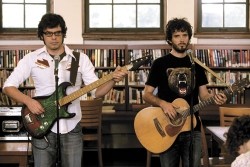 Flight of the Conchords

New Zealand's greatest export since, well, ever, returns at 10 p.m. Sunday for its second hilarious season, picking up where it left off - with Jemaine and Bret still trying to launch their non-starting music career. In this week's episode, the guys split with manager Murray after his other band, the Crazy Dogs, hits the big time with their atrocious "Doggy Bounce." Bongo solo!

This old-school-meets-new-school outing for the Wii includes six board-game faves - including Boggle, Connect Four and Sorry! - reconfigured for folks who grew up on Donkey Kong. Some work (Yahtzee is loads of fun); some don't (Battleship is confusing and sucky). Best of all, Party Mode lets everyone join in. Finally, a videogame even Grandma will love.

Pink Floyd liked this British singer-songwriter so much they let him sing "Have a Cigar." Led Zeppelin liked him too, penning "Hats Off to (Roy) Harper" in his honor. This two-disc best-of gathers 25 songs from his long and twisted career. The set covers 30-plus years - everything from the minute-long "Francesca" to the 19-minute "One of Those Days in England."

After a five-year hiatus, the most ass-kicking little girls on the planet return with a new special featuring almost every villain they've ever tangled with. Creator Craig McCracken hosts a 14-hour marathon of his favorite episodes starting at 6 a.m. Monday, culminating at 8 p.m. with the premiere of the new ep. Totally awesome!

Just in time for this week's season premiere of the best show on TV, this six-disc set gathers every episode from last year's terrific and revealing run. We still have tons of questions, and the flashforwards open up a whole new hatch of queries. But there's some great storytelling here, supplemented with cool deleted scenes and behind-the-scenes features.