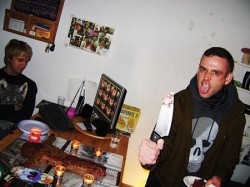 By the fall of 2002, Erie transplant Sean Carney had been in Cleveland for nearly a decade. He had some good times, although dropping out of Case Western Reserve to hang out at the Euclid Tavern and listen to underground rock groups like Craw and the Jesus Lizard wasn't a career path most advisors would recommend. He'd played in bands, written about music and booked shows at the funky DIY venue Speak in Tongues. He helmed local monthly music magazine U.S. Rocker for a year before it folded in late 1998, using its pages to promote noisy, obscure music and to stir up trouble, including a feud with the Cleveland-based Alternative Press.

Then he took a good look around Cleveland and realized that it probably wasn't going to get any more exciting than the job he had with the now-defunct Ohio Lawyers Weekly. So in October 2002, he headed west to Los Angeles, hoping to find work in publishing and maybe break into TV and video.

"We released eight movies every Tuesday," he says. "Roger Corman, eat your heart out! People lament the loss of old Hollywood, but it hasn't gone anywhere. It's in adult films. It's a life of constant insanity."

After 18 months, he left to produce Queer Edge with Jack E. Jett and Sandra Bernhardt at Queer Television. "It was the most exciting job I've ever had," he recalls. "I'd never worked with all gay people, and we felt we were on a mission." But others had different goals. "It turned out that the higher-ups were doing a Ponzi scheme, bilking elderly gays out of money. So I was unemployed on and off for over a year. I worked on some other TV productions. But nowadays everything is reality shows. I was like, fuck it. I thought [TV] was what I wanted to do. In reality, I was a production assistant or working in the licensing department - totally uncreative."

Through it all, Carney's love of music sustained him. In August 2005, he launched Monday Music Nights, a tribute to the weekly concerts held at the Euclid Tavern in the '90s featuring underground, way-out-of-the-mainstream artists. The shows are now held at Pehrspace in Glendale, which he describes as "very freewheeling, like Speak in Tongues minus the residents and the animals."

"L.A. has an absolutely incredible music scene now," he says. "People like No Age, who played my place recently, are starting to get a lot of attention. Other bands have been following in their wake, and a lot of them got their start at my Mondays, bands like Health and Abe Vigoda. The bands tend to be indie-rock bands, but the biggest component is more like party noise - noise bands but almost surreal, eccentric."

A few years ago, Carney joined his love of music with his video expertise and produced a film called 40 Bands 80 Minutes, which documents the underground music scene. In early 2007, he returned to Cleveland and screened it at Parish Hall.

Unzipped is about as far from Ohio Lawyers Weekly as Carney could ever imagine. The only man in a suit you'll find on the site is Portland, Oregon, Mayor Sam Adams, who was recently busted for having an affair with teenage intern Beau Breedlove (apparently his real name). The hot, breaking story is lavishly covered on Unzipped, with photo galleries of both men. Last week, Carney posted a challenge to Breedlove, issued by the publishing group: "An official invitation … for a cover story and a full nude photo layout in the pages of one of the Unzipped Media properties."

While waiting for that photo spread to hopefully materialize, Unzipped.net visitors can preview Breedlove's assets as he poses in skimpy trunks or check out such features as "Eye Candy: Walk Softly and Suck on a Big Stick" and "Big Pole Friday: Plaid Explosion," in which dewy-cheeked college boys are shown both with and without plaid shirts. (A partner site, Belowthebelt.com, features the uncensored photos.)

"All my heart and soul is going into it," says Carney of the site. "I'm so proud of Unzipped.net. It's such a labor of love for everyone involved."