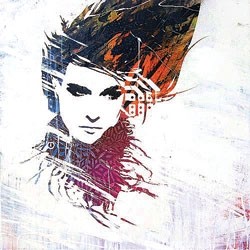 Leon Bedore - a.k.a. Tes One - started painting graffiti around Tampa Bay in 1992, and like most illegal painters, he used mostly spray paint. Tis technique has evolved, and these days his works have moved from train tracks and abandoned corners of the Sunshine State into art galleries and, at least while his portrait of Barack Obama (done for the campaign's Manifest Hope show) is on loan to the White House. His work has always dealt with social and environmental issues, but this is his first foray into politics. "The optimism I felt during the campaign was very inspiring to me," he says. "Thankfully, I was able to convey that in a painting for the Inauguration." This week, the graphic-design-oriented painter opens a show at Artchitecture Gallery (1667 E. 40th St.). The medium-size works use stencils, sometimes layered, and a mix of paint types to achieve a palimpsest of styles and textures. One portrait of a woman seems to have a bit of circuit board appended to the side of her head. In another, a vicious-looking dog is juxtaposed with the kind of cheery script you'd find on the entrance to a diner: "Come in!" The show opens with a free reception from 7-10 p.m. Friday and runs through April 5. Call 216.533.5575 or go to artchitechturegallery.com.

The Great Lakes Theatre Festival takes the show on the road, with a series of free performances of two plays by Anton Chekhov. The short works - The Harmful Effects of Tobacco and The Brute - are comedies that ought to resonate in poverty-stricken, cigarette-taxing Cuyahoga County. In Tobacco, smoker Ivan Ivanovich is cajoled by his wife into giving a speech on the dangers of smoking, despite his own habit. The Brute begins when a widower is visited by one of her late husband's creditors looking to collect on a debt.Tonight's performance is at 7:30 at the Mandel Jewish Community Center (26001 S. Woodland Rd., Beachwood, 216.593.6258). Go to greatlakestheater.org for a full schedule of performances around the region through March 18.

SATISFIED BY THE SOUND BYTE

American Rust could be about Cleveland, but Philipp Meyer set it in a fictitious dying town outside of Pittsburgh. "I grew up in a crumbling neighborhood of Baltimore, with the steel and textile industries leaving, so that what had been solidly middle class was becoming working poor," says Meyer. "So there was a fair amount of violence. A couple of our neighbors - everyone knew they killed people. Someone was beaten to death in front of our house. There was a level of constant violence." Meyer got out, went to college and made a bunch of money on Wall Street before deciding that wasn't really as important as his dream of being a writer. American Rust, his debut novel, is the story of two men, ages 20 and 21, and their involvement in the murder of a homeless man. Set against a backdrop of desperation, Meyer says the book is fundamentally hopeful: "It's about people doing the right thing at the hardest time." He'll sign copies at Joseph Beth Booksellers (24519 Cedar Rd., Legacy Village, Lyndhurst) at 7 p.m. Thursday. Call 216.691.7000 or go to josephbeth.com.

For a lot of folks programming early-music ensembles, a nagging and provocative question is what to pair with works by certain staple composers - especially on baroque programs, Antonio Vivaldi. Jeannette Sorrell has continually succeeded at this game and does so again in a series of concerts matching the beloved Red Priest with rival contemporaries. In a program called Virtuoso Fire: Italian Concertos by Vivaldi and Rivals, she's lined up four pieces by Vivaldi - Oboe Concerto in d minor; Allegro From Concerto in F major for Three Violins; Concerto in C major for Violin & Two Cellos; and Concerto for Four Violins - matched with one each by Tomaso Albinoni (Oboe Concerto in d minor), Francesco Maria Veracini (Concerto Grosso alla Rustica) and Benedetto Marcello (Concerto ˆ 5 in F major). The works for oboe will feature Brazilian-born Oberlin professor Alex Klein, who started playing at 9, was performing as a soloist with orchestras within a year and performed with one of Brazil's top chamber ensembles by 11. He studied at Oberlin and became principal oboe at the Chicago Symphony when focal dystonia forced him to quit - but not before he won a Grammy for a performance of the Richard Strauss oboe concerto. Apollo's Fire will, as usual, perform the program in churches all over town: 7:30 tonight at Fairlawn Lutheran Church (3415 West Market St., Fairlawn); 8 p.m. Friday and Saturday at St. Paul's Episcopal Church (2747 Fairmount Blvd., Cleveland Heights); and 4 p.m. Sunday at Rocky River Presbyterian Church (21750 Detroit Rd., Rocky River). Klein will be giving a pre-concert lecture one hour before each performance. Tickets: $20-$60. Call 216.320.0012 or to go apollosfire.org.

Stepping, a dance form with roots in the fraternities of black colleges and universities, is reaching beyond those walls lately, with a few books and movies on the subject and, since 1994, the Step Afrika! Company. Like tap dancing or hambone, it's rhythmic movement that makes music. But it's also about corporate precision, with teams performing in carefully synchronized routines. Step Africa! brings its high-energy program to PlayhouseSquare's Allen Theatre (1501 Euclid Ave.) at 7 p.m. Tickets: $10-$20. Call 216.241.6000 or go to playhousesquare.com.

Arabic pop music is marked by a rich blend of strings, synthesized sound, ample percussion, trilling voices and the frequent use of the word "habibi" (which can mean "brother" or "my beloved"). It's distinctive and instantly likeable, and easy to stumble upon if you listen to WCSB 89.3 FM, which presents a program of Arabic pop from 6-8 p.m. every Saturday. But to hear it in its classical glory, check out Palestinian-American composer and multi-instrumentalist Simon Shaheen's band Aswat ("Voices") at 7:30 p.m. at PlayhouseSquare's Ohio Theatre, part of Cleveland Museum of Art's Viva and Gala Around Town series. They pay tribute to the music's "golden age," the groundbreaking time from the '20s-'50s. The performance has top Arabic singers (Ibrahim Azzam, Khalil Abonula, Sonia M'barek and Rima Khcheich) accompanied by the band, with a multi-media presentation of images and vintage film footage to complement the sound. Tickets: $41. Call 216.421.7350 or go to clemusart.com.

While the Cleveland Orchestra is in Miami, the Cleveland Orchestra Youth Orchestra and Youth Chorus will perform at Severance Hall (11001 Euclid Ave.). At 3 p.m., COYO Music Director Jayce Ogren - who makes his subscription-concert debut with the Cleveland Orchestra in May - will get things started with Igor Stravinsky's Scherzo ˆ la russe, followed by Johannes Brahms's Schicksalslied, which will also feature the chorus. After intermission, COYC director Frank Bianchi will lead the chorus in Eduard Toppenberg's Balia Di Sehœ for a cappella chorus; Charles Theodore Pachelbel's Magnificat for double chorus and continuo, with pianist William Shaffer; Anton Bruckner's Os justi for a cappella chorus; and the traditional spiritual "The Battle of Jericho" for a cappella chorus. The concert concludes with Ogren leading the Youth Orchestra in Tchaikovsky's Symphony No. 6 in B minor, Opus 74 ("Pathétique"). Tickets: $12. Call 216.231.1111 or go to clevelandorchestra.com.

Beethoven for Cello and Piano

Beethoven's five sonatas for cello and piano are one of those musical packages attractive to performers and recording companies alike: A complete set is a substantial but manageable thing that provides a stylistic overview of the composer's evolution. The begin with lighter, more classically styled pieces, but by the end, they are full of the mysteries and deep romanticism that marked his later string quartets and other works. Cellist Pieter Wispelwey and pianist Lois Shapiro perform all five at the Cleveland Institute of Music's Mixon Hall (11021 East Blvd.) at 7:30 p.m. as part of the Cleveland Museum of Art's Viva and Gala Around Town series. Tickets. $41. Call 216.421.7350 or go to clemusart.com.

Levy Lee Simon's The Bow Wow Club had a long road to its premiere. Winner of the 1998-99 Lorraine Hansberry Award for Best Full Length Play, Levi "Lee" Simon Jr.'s work didn't get produced until 2006, when the Stella Adler Theatre of Los Angeles mounted it. The play, about the reunion of school friends who were all about having fun when they went their separate ways 20 years earlier, won a feature spot in the 2007 North Carolina Black Theatre Festival. This week, Karamu (2355 E. 89th St.) opens its production, directed by Hassan Rogers, with a preview performance at 7:30 p.m. today, running through April 5. Preview tickets: $10, other nights $20-$25. Call 216.795.7077 or go to karamu.com.