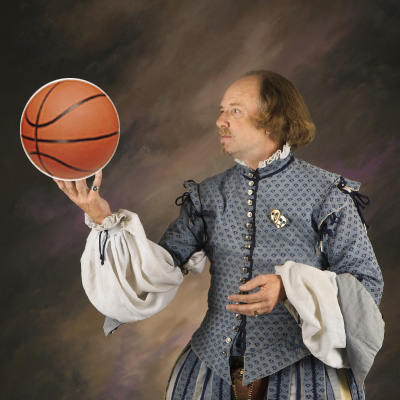 Before we all head home to the glories of original Thursday night television and the beginning of the Sweet 16, let us hereto be primeth absolute to the majestic beauty of the collegiate athletic competition in the words of the Bard. Well, not Shakespeare himself, but those who purport to know him awfully well.

Carolyn from And One found this darling little story. Apparently the authorities at the American Shakespeare Center are quite sure that if he was alive right this minute, he'd be completely enthralled with the NCAA tournament.

People can debate the identity of William Shakespeare, but the one thing we know for certain is that Will Shakespeare was a huge fan of March Madness and famously admonishes basketball fans to "remember March, the ides of March remember!" Now that the Ides of March is past, we have our basketball Sweet Sixteen, and Shakespeare through his friends at the American Shakespeare Center is weighing in on the Bracket to the Final Four and the 2009 national championship.

Apparently they use lines from his plays to pick the winners. For the record, he/they have Pitt/Carolina/UNC/Michigan State in the Final Four. Sad thing is, I think a dead guy has a better bracket than I do.