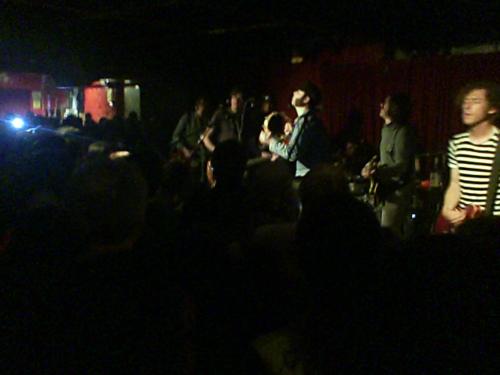 It's appropriate that Brian Jonestown Massacre strolled onto the Grog Shop stage last night as Human League’s “(Keep Feeling) Fascination” blared through the speakers. There is something fascinating about the decade-old group, even if its mix of Velvet Underground and British Invasion rock is hardly groundbreaking.

Singer-guitarist Anton Newcombe is such a volatile frontman, he’s prone to hurling disparaging remarks at band members in the middle of performances and having security boot hecklers from a show. The sold-out gig was notable because it featured a reunion of original members Matt Hollywood and Joel Gion — not that that meant things were anymore stable than usual. At the start of the show, it took a good 10 minutes before the band got all the microphones working. After Newcombe demanded the stage lights dimmed, he snarled, “Turn this monitor up, because I am the lead singer of the band.” At one point, he turned to his guitarist and told him to unplug when he breaks a string in the middle of song because “it’s not like I need you; I have four other people playing guitar up here.” When a backing track wouldn’t play, he really lost it. “Jesus fuckin’ shit!” he screamed.

But despite the hysterics, this was one helluva Jonestown show. While the droning guitars often just deteriorated into deafening feedback, overshadowing songs that actually do have some nuances to them, it didn’t disrupt the momentum. Those nuances emerged on tunes such as “Who?” and “When Jokers Attack,” and the results were absolutely mesmerizing. Even when things started to fall apart by the end of the two-and-a-half-hour set, Newcombe and co. found a way to bring it back together.

By the end, Newcombe seemed like a broken man. Hunched over his guitar, all the fight was taken out of him as he whispered, “it’s such a bad song/it’s such a sad song it is” as the show’s fitting conclusion. —Jeff Niesel