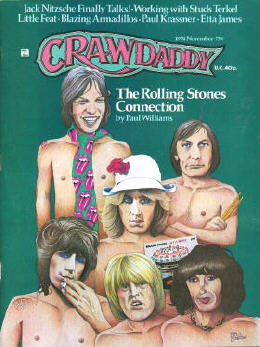 Feeling in a giving mood? I know, it's hard to give to others when you might be eating cat food in a couple months. But just in case you have some spare cash around, Paul Williams — who founded Crawdaddy!, the first magazine to take rock 'n' roll seriously — needs some help.

Williams has been suffering from Alzheimer's the past few years. His family is having a tough time caring for him and keeping up with his medical bills. If you're feeling generous, they've set up a support fund on Williams' website.

Crawdaddy! started in 1966, a couple years before Rolling Stone launched. Before that, music mags leaned toward teen stuff — you know, "Mick Jagger's favorite color" and things like that. Williams viewed rock 'n' roll as a valid art form and treated it as such in the pages of Crawdaddy! His early reviews set the template for every music magazine that followed.

Williams has been inactive for the past decade, after a bike accident left him with a brain injury. That led to Alzheimer's and left Williams' wife (anti-folk singer-songwriter Cindy Lee Berryhill) and son with a huge debt. So, again, if you're feeling in a giving mood ... Just sayin'. —Michael Gallucci