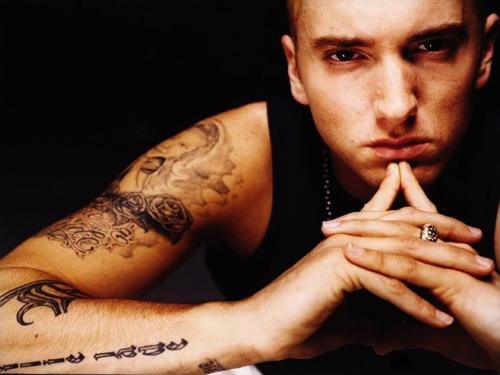 Sure, we're mega excited about this weekend's Rock and Roll Hall of Fame inductions. Can't wait to see Jason Newsted with Metallica again and Run-DMC. But we're just as excited to check out the artists inducting the Class of '09: Jimmy Page, Eminem, two E Streeters, Flea ... um, scratch that last one.

There's been enough debate about who's going in this year and whether or not they deserve it (bitch all you want about Little Anthony and the Imperials, but your mom and dad got crazy busy to their tunes back in the day). What about the artists inducting the inductees? Do they deserve to be in the Rock Hall?

Three of the presenters are already in there: Jimmy Page (inducting Jeff Beck), Smokey Robinson (Little Anthony and the Imperials) and Ron Wood (Bobby Womack).

That leaves two artists: Eminem (who'll induct Run-DMC) and Flea (Metallica). What are their chances of actually getting in the hall someday?

Now that the Rock Hall has opened its doors to hip-hoppers (starting with Grandmaster Flash a couple years ago), and since there were more exciting rap crews (Public Enemy, N.W.A, Eric B & Rakim) than rock bands in the late '80s, you'll probably see lots more over the next few years. Eminem is a definite shoo-in. Especially since he's playing nice by coming to town to present Run-DMC with their award. Plus, he's made better records than a lot of recent inductees (the Ventures? The Dave Clark Five? Please).

Which leaves Flea, the Red Hot Chili Peppers' bass player and all-around annoying guy. The Peppers' faux-funk frat-rock isn't very original. It isn't very good either. Somewhere down the road, though, the Rock Hall will probably acknowledge these guys — kinda like it begrudgingly honored the Dave Clark Five decades after anyone cared about them.

What do you think? Does Eminem eventually belong in the Rock Hall? What about Flea? And how about Paul Shaffer? Surely there's room in the irritating bald-headed sidekick category for him. —Michael Gallucci