Hard Rock Serves Up Some Raspberries 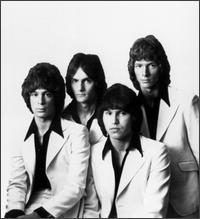 It’s good to see the Rock and Roll Hall of Fame finally involving the actual museum and the Cleveland community in the induction hoopla with a weeklong series of events, similar to how the Football Hall of Fame in Canton handles its annual induction. And it’s great to see some Cleveland musicians involved.

Influential ’70s pop-rockers the Raspberries (whom many believe belong in the hall themselves) were tapped to play at a private VIP party at the Hall Friday night. They’re taking advantage of being all together (bassist Dave Smalley lives out of town) to publicly donate some memorabilia to the Hard Rock Café in Tower City. They’ll be at the Hard Rock from 12:30-1:30 p.m. Saturday for a free and open-to-the-public event, where the foursome — rhythm guitarist Eric Carmen, lead guitarist Wally Bryson, drummer Jim Bonfanti and Smalley — will present the Hard Rock organization with some tour posters, drum heads and a limited-edition lithograph. “We’re going to sign the bass head on Saturday,” says Bonfanti. “They’re going to take the stuff and ship it to their headquarters in Orlando, put it together in a frame and bring it back to Cleveland for a while. Then it’ll move around to different Hard Rocks.”

The group, which broke up in early 1975, was a progenitor of what became known as power-pop, distinguished by its revved-up rendition of the ’60s British invasion sound with ringing guitars and soaring four-part vocal harmonies. During their time together, they had seven charting singles, including the unforgettable 1972 summer anthem “Go All the Way,” which peaked at No. 5. The band reunited with the classic lineup that recorded three of the band’s four albums — the self-titled 1972 debut, Fresh later the same year and 1973’s Side 3 — in November 2004 to open Cleveland’s House of Blues.