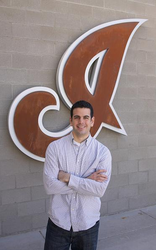 Indians.com beat writer Anthony Castrovince was kind enough to have a very long conversation with me about a whole bunch of different topics. Here's the first half of the interview, where we talk about Bruce Springsteen, Seinfeld, the media, blogging, music, and massage chairs. Either tomorrow or Monday you'll get the part of our conversation having to do with Actual Baseball Stuff.

VG: How badly do the players disappoint in terms of at-bat music. Anyone who's stopped by CastroTurf knows of your love of the Boss. Not a single player uses a Springsteen tune. A)Have you bugged anyone to? B) What song would be your at-bat music? I'd go with "Sherry Darling."

AC: Casey Blake always claimed to be a huge Springsteen fan, so I was disappointed he would play something like Metallica and not “Badlands.” In general, though, talented ballplayers have so much handed to them over the course of their lives. They only have to make three major life decisions — who their agent will be, who they’ll marry, and what their at-bat music will be. It’s not my place to get in the way of any of these.

Personally, I’d probably go with “Born to Run,” which I recognize seems a little trite and overplayed, especially compared to a rare nugget like “Sherry Darling.” But the simple fact of the matter is that nothing in the world pumps me up like the first five seconds of that song.

My brother, Bill, has this idea that he’d want his at-bat music to be the National Anthem, because everybody would have to stand up every time he came to bat. I think that’s genius.