Cliff Lee and Why You Should Get Off the Ledge 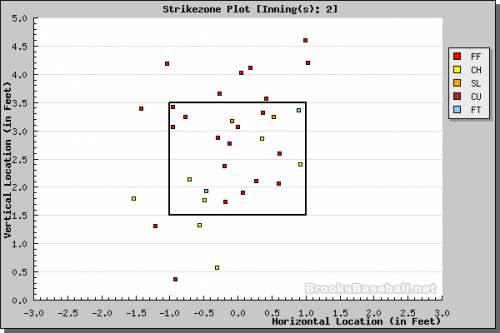 That chart right there is from Cliff Lee's second inning against the Texas Rangers yesterday — the frame in which Cliff Lee went kaplooey. It was an overall atrocious outing for the reigning AL Cy Young winner: 5.0 innings, 7 ER, blah blah blah; but the second inning was particularly bad.

Now, everyone's wondering, if they weren't already, if Cliff Lee is bound to have a down 2009.

Temper your worries, young ladies and gentleman, at least for now.

First of all, it's just one game, and even though Cliff had a rough spring, no reason to extrapolate that to the coming months. Second, as Castrovince pointed out in his postgame blog, Cliff has always had trouble pitching in Texas. Consider his one start in Arlington last year, 5 innings, 9 hits, 6 ER. Third, this loss came down to a horrible second inning after Lee was struck in the arm by a batted ball, and one bad pitch to Hank Blaylock in the fifth.

Take a look at the pitch chart above, which comes courtesy of the always brilliant and useful Brooks Baseball, using MLB's Pitch FX data. Lots of pitches up and in the middle of the zone in the second inning. Nothing much on the corners.

Now, take a look at the chart below, which has the rest of Cliff's pitches for the entire game with the exception of the disastrous second inning. 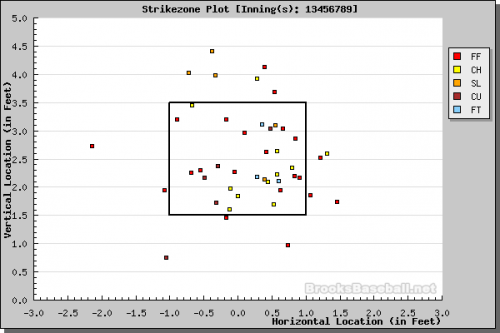 Much better location on those pitches.

If you check out the rest of the Pitch FX data for Lee from yesterday's game, you'll see that his velocity and pitch distribution seem in line with last year's numbers. The data from yesterday also seems to suggest that during the second inning Cliff lost a lot of movement on his fastball, which combined with the fact that they were up in the zone, explains why he got pounded.

Below is a chart that shows at-bat results, and, predictably, everything up was basically hammered. 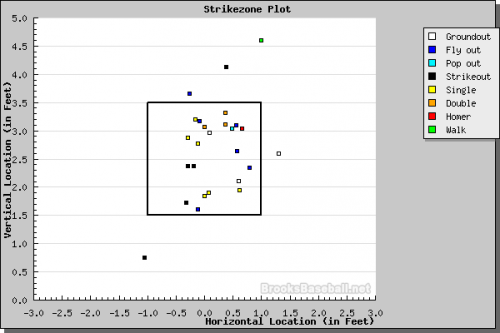 My guess: Probably a little numb from getting hit on the arm, because he was able to get better movement and location the rest of the game.

The lesson: Cliff Lee might indeed blow up this year, in a bad way, but I don't think yesterday's loss to the Rangers means that is any more likely or less likely than it was before.

Note: There's a ton of other data from Pitch FX on the Brooks Baseball site that I'm not even going to pretend to understand. There's also a chance I'm misreading these graphs on some level, though I hesitate to think I am with the pitch location charts. If I'm wrong, please let me know.