On Cheating and Hot Dogs 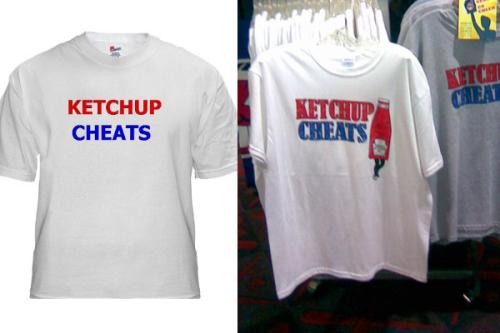 A little public service announcement. If you want to buy a "Ketchup Cheats" t-shirt, please buy it from the lovely people who run KetchupCheats.com.

What?, you say. Isn't that the only place that one can buy such apparel? No, it is not. The Indians are now selling "Ketchup Cheats" t-shirts in their team shop. I don't know the price, but I'm sure it doesn't beat the rock bottom $14.99 that you'll pay for a version from the blog.

While it might seem like horrible PR to step on the toes of the fans who created the blog, started selling the shirts, and who have been the reference point for every shady hot dog race in the last year, the Indians are within every legal right to sell the shirt. They own everything that happens within the confines of the park — all phrases, fan activity, in-game entertainment, etc. — especially when a slogan is worn on shirts at the park and signs are held up in the stands.

Yes, that means even using the exact color scheme for the slogan.

If you're going to lay down some cash for a shirt, do so for the little guy. The proprietors of the site e-mailed me a little miffed that the Indians would get into the "Ketchup Cheats" game without contacting them. Turns out they're season ticket holders and just wanted a little recognition.

In their own words:

My seat partner is ok with everything as it stands, she just wants credit for the original concept of Ketchup Cheats. The Indians didn't invent it, it was an observation that we made and they took the ball and ran with it, so to speak. I guess because I was a graphic artist for a number of years I get protective of my own artwork, and their shirt is derivative of ours. I can admit they are legally right, but ethically it doesn't sit well with me.

We do have a website and have sold a few Ketchup cheats shirts on it. It's cafe press set up and we make pennies (and I do mean pennies) on anything we sell, we have added that if we made any money on any merchandise that it would go to charity. For us this is a grassroots thing. Them making money on the shirts took the fun out of it for me.

Put the fun back in it for them f you're in the market for some processed meat slogan gear. It's for charity.