Capsule reviews of two films opening at the Cedar Lee

So while the re-tooled Terminator flick with Christan Bale takes on the Night at the Museum sequel this weekend, the Cedar Lee Theatre is opening two art flicks. Valentino is a well-done documentary about the Italian designer that takes you behind-the-scenes of his life, and Shall We Kiss is a cute French comedy that'll remind you of a Woody Allen movie. Here are our capsule reviews of the movies, which open Friday. 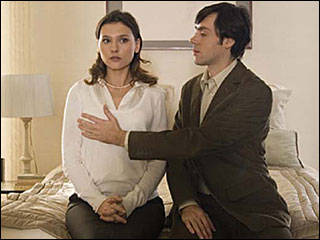 Shall We Kiss? This foreign film might be stereotypically French, but don’t hold that against it. The story revolves around Gabriel (Michaël Cohen) and Emilie (Julie Gayet), who meet by chance one afternoon. After Gabriel gives Emilie a lift, he senses the two have connected and offers her a “kiss without consequences.” She turns him down, maintaining that innocent exchanges don’t exist and proceeds to tell him a story about her friend Judith (Virginie Ledoyen), who thought she’d kiss her pal Nicholas (Emmanuel Mouret), and nothing would come of it. Told as a series of flashbacks, Judith’s story is both romantic and tragic, causing Gabriel to rethink his offer, even though he’s even more attracted to Emilie after he spends several hours listening to her story. Like a Woody Allen movie (the comparison is especially fitting since Mouret wrote, directed and starred in the film), Shall We Kiss? is well-acted and -directed, even if its European sensibilities aren’t likely to connect with mainstream American viewers. *** (Jeff Niesel)

Valentino: The Last Emperor In a documentary spiced with unimaginable glamour, no single image speaks to wealth’s fantasyland on Earth quite as powerfully as the sight of a pack of five pugs being led onto a private jet. These pampered pets proceed to take up two seats on the plane, compelling the flight crew to politely ask couturier Valentino Garavani if the dogs can be moved to make room for human passengers. Valentino — the single name has branded his image, line and lifestyle since 1960 — doesn’t comply himself, but the situation is handled. And, as captured in Vanity Fair special correspondent Matt Tyrnauer’s documentary debut, Valentino: The Last Emperor, it is the strategy by which most of the Italian designer’s life and career has been maintained. By far, the best moments in the documentary come in the form of the tireless, rambunctious and just plain cool seamstresses who make every one of Valentino’s couture designs by hand. Their skill and work sticks to the brain after the designer’s opulent grand fete in Rome: the knowledge that behind every grand illusion of an evening gown, it’s the expertise of human hands that turn a two-dimensional idea into a gorgeous reality. *** (Bret McCabe)