Artie Lange Is Comin' to Town 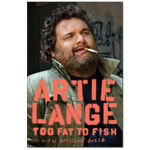 Artie Lange — the greatest Howard Stern sidekick ever — is comin' to the Cleve on June 20. All tickets are $50.

All due respect to Artie, we'll be shocked if he arrives anywhere close to on-time for either. The tix are expensive, but it's a rare chance to see the guy before he has a coronary fueled by booze and other stuff. By "other stuff," we mean greasy food.

Anyway, now that we've kinda bagged on him, here's a plug for his recent autobiography, Too Fat to Fish. He ain't kiddin'. Go buy it.