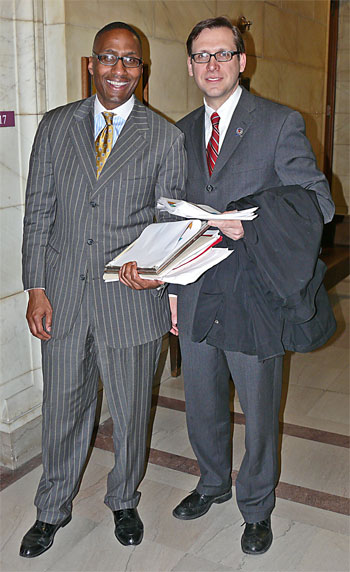 In keeping with his flair for histrionic publicity, Mt. Pleasant Councilman Zack Reed finally made official last week, from the pulpit of Holy Trinity Baptist Church, what everybody already knew he was doing this reelection season: trying to win. He’ll run in the newly formed Ward 2, what will amount to an open seat since interim Councilman Nate Wilkes, filling in after Robert White’s bribery conviction, wouldn’t want to ride that wake anywhere.

With the redistricting, the biggest hunk of Reed’s old voting base now resides under the poised and highly connected leadership of Councilwoman Mamie Mitchell in a new Ward 6, which sucks for Reed, since Mitchell seems to have already won them all over with her friends-in-high-places approach, her credentials as corresponding secretary for county Dem boss Jimmy Dimora always preceding her.

Reed says a lot — metaphysically and money-wise — weighed on his decision.

“I listened to signs from heaven, like when I was at a Senior Day event,” reminisces Reed. “It was almost prophetic in that Nate Wilkes didn’t show up, so as I sat there, contemplating, that I have to walk this walk. That’s what the Lord said, ‘That’s what I want you to do.’”

Besides, he adds a minute later, “We just didn’t feel like going through the fight. We were going to be fighting against Mamie, but also against the county party, fighting against Jimmy and [Council President] Marty Sweeney [and his Council Leadership Fund]. And I gotta believe that Mayor Jackson would have supported her.”

We’d say the Lord was right on the money this time around too!

This has been the lot that Reed and Old Brooklyn Councilman Brian Cummins have been handed, ever since Council President Marty Sweeney tried to redistrict their unflagging dissent to the breeze.

Cummins came out in pretty short order against beleaguered incumbent Joe Santiago for the new Clark-Metro ward. But Reed needed a little more time to ponder his personal universe. He consulted with his old mentor and boss, former San Fran Mayor Willie Brown.

“He said, ‘Put all your name and face recognition that you may have aside,’” recalls Reed. “‘Make sure you run in a ward that you can win in.’”

And so, to Reed, the Lord — and Willie Brown — speaketh, and Reed receiveth. But until that happened, Reed was hedging his bets.

Back in April, he pulled petitions to run in the new wards 2 and 6, just to be safe, and that gave him a few months to decide which ward was giving him the best mojo. Right up to the wire on Thursday, Reed said his six-person campaign-committee were split evenly and that he pretty much had to flip a coin. A bad omen? A bad campaign committee? A bad decision? Only God, as Reed is wont to say, knows for sure.

And maybe the Democratic Party.

“I can’t make a decision out of anger here,” says Reed, referring to his early hints that he would love a chance to bump heads with the city’s power establishment with a run against Mitchell. “I have to make it so that this is a way to get back down to 601 Lakeside and fight for the average Clevelander. The big guys in the corporations got somebody down there all the time on their behalf. But the average Clevelander doesn’t have anybody down there.”

What about Jesus? They’ve got Him down there, don’t they? —Dan Harkins