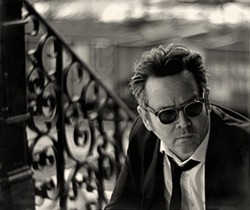 Two years ago at Music Box Supper Club, singer-songwriters Steve Poltz and Grant-Lee Phillips played a fun co-headlining show. They couldn't stop talking about what a great time they were having together on their first-ever tour together.

At the show's start, they immediately launched into a bit of banter before Phillips finally said, "Let's do a song together." Their cover of "Gentle on My Mind," a John Hartford song made famous by country singer Glen Campbell, had a simple elegance to it as the two gently strummed their acoustic guitars and sang vocal harmonies together.

"There's a story," says Phillips when asked about what that tour with Poltz was like. "The great American novel could be written. He's a really sweet guy and a fascinating dude. I love his songs and his mind and spirit. We really connected immediately from the first show. We had never met prior to that. Our agent set up this blind date, but it worked out."

This time around, Phillips, who'll bring a solo tour in support of his new album, Widdershins, to Music Box Supper Club on Sunday, March 18, has teamed up with Throwing Muses singer-guitarist Kristin Hersh.

"Kristin is a different kind of animal," says Phillips. "She's not an animal at all. She's quite a different person offstage. When she's on stage, she goes into a sort of trance when she's singing and then off the stage, she's one of the funniest people I know. Onstage, I wouldn't want to go near her. I've been on stage with her, but I keep my distance."

The double billing should work out well. Both Phillips and Hersh are veteran singer-songwriters who can command a room even without a band.

Phillips, who grew up in sleepy Stockton, Calif., received his first guitar as a Christmas gift and was immediately taken with it.

"Something happens when you discover the guitar," he says. "It becomes this medium that you can put all your emotions into non-verbally. I took to it and it never really left my hands throughout my teenage years."

Having performed at the local Stockton theater, where he did sketches, comedy and magic, Phillips says he felt "destined" to wind up in Los Angeles where he could hopefully apply those talents to filmmaking.

After arriving in La La Land, he learned how to operate a camera and began working on film crews. His love of playing music, however, led him to abandon that pursuit and instead explore singing and songwriting.

"Maybe about a year into it, I realized I couldn't focus on it because my desire to make music was so great," he says. "I just decided to work my horrible day job and to sleep for three hours a night because I was playing clubs at night. I made a deliberate move."

Initially, Phillips had some success with the indie rock act Shiva Burlesque. When that group broke up, he started playing solo shows as Grant Lee Buffalo before assembling a full band to back him. The group became critics' darlings.

"It was an exciting time — exhausting but exciting," he says. "You go from playing music in your garage to playing in some of the biggest venues with people like R.E.M. Next thing you know, you're on a festival bill with some of your heroes, like David Bowie."

Recorded over four days at Sound Emporium in Nashville, Widdershins was cut largely live in the studio as a trio with drummer Jerry Roe and bassist Lex Price. Mixed by Tucker Martine (My Morning Jacket, the Decemberists) and engineered by Mike Stankiewicz, the album shows off Phillips' evocative voice and provides some commentary on our troubled times too.

"This is an interesting album because it was written quickly and recorded shortly after I had written the songs and put out within six months," says Phillips. "The bulk of it was written between November of last year and maybe February. I set up the time to record it in May, but I didn't play it live that much. It was very fresh and very much a reflection of this time. It's highly personal and sometimes there's a social thread as there was with some of the early Grant-Lee Buffalo records. This album is along those lines. These times feel so ramped up and that pushed the feeling of the album, the drive behind it, the lyrics and even the manner of putting it out so quickly. There are other songs sitting on my desk waiting to be recorded. Some of them might be turned into mulch, I don't know."

The album begins with the high-energy, alt-country-ish tune "Walk in Circles." Inspired by a St. Augustine quotation, the song serves as a "proclamation of allegiance to the underdog and to the pacifist and the meek and vocal people of the world who are standing up to the bullies but having a laugh along the way and being able to defeat such ideas with humor and guitars." It's good stuff.

With its hoarse vocals and twisted guitars, "Scared Stiff" has a really manic, punk-ish quality to it that Phillips stems from the way in which it was conceived.

"That one was written during a feverish evening," he says. "I'm sure it's something I wrote while I was flipping through one episode of breaking news after another. I was talking to a fellow musician who said he spent the day after the 2016 presidential election curled up in a state of rigor mortis unsure of what was around the corner. I realize not everyone looks upon our current climate as being a need for concern. To me, that's concerning. We all have our blind spots. It's become difficult to find the best way to articulate it. I can't say it's possible to meet in the middle when I feel such opposition to such ideas."

A conversation with a close friend inspired the tune "Totally You Gunslinger," a tender, folk-y tune about a guy who wants to get a gun.

"What makes someone who is normally peaceful seek out that kind of solution for security?" says Phillips. "Obviously, there's a big part of the country that embraces that idea. We've been conditioned to this new state of violence that passes off as normal. The song was actually written about a year ago."

With rattling drums and chanted vocals, "Liberation," a sardonic song about a political victory, makes for a great closing number.

"I tend to write songs and stand back and have a listen and see which ones fit together and which ones deserves to be recorded and which ones should be kept off the record," says Phillips when asked about how it wound up as the album's last track. "I look at them after I've done the work. It's more liberating that way. There usually in some thread that connects the songs. I don't always set out to adhere to it. Usually, it reveals itself. There's a lot about doublespeak and duplicitous governments [in 'Liberation']. It's a fiery song and one of the final things I wrote for the album. That sometimes plays a role in where the song goes. If it's written late in the hour then maybe that's where it fits best."

For the upcoming Music Box Supper Club show, both Hersh and Phillips will play acoustic sets.

"I always see this as an opportunity to share the new songs," says Phillips in reference to the upcoming gig. "It's difficult to resist the old songs that I know I have that connection with and that my audience has a connection with. I rarely use a set list. As a result, some songs get tossed in more than others. I like that freedom. It's one of the upsides of performing by yourself."