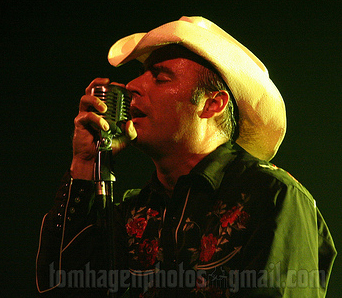 It’s a short drive to Bilbao, about 45 minutes. We open for some big shit Basque band called Berri Txarrak. The hall is a 1200 seater and allegedly sold out, so this will easily be our biggest show of the tour. Fittingly, it comes on the final gig. We’re not that fired up about it yet though. It hits us that in a few hours that this will be over, and we are completely disorganized to leave back to the USA. Our goal prior to the show is to get ourselves organized for the trip back home.

After a couple weeks on the road in the van, the van has become like a sailing vessel from the Days of Yore. There are tight quarters, so everyone claims their own areas and guards them jealously. Ken has ridden shotgun from the get-go, and he controls the front seat with Christoph. Leo and I have split the middle bench, and I have claimed the top storage shelf over the driver’s head to lay out my obscenely sweaty cowboy shirts, and various gas station snacks. Leo sits next to the far window, leaning into the cheap fold out plastic desk to better read his paperback copy of “Hammer of the Gods” like it is one of the Dead Sea Scrolls. Gary is in the very back where the squirrel’s bounty is spread around like a tornado has hit the area.

It’s unbelievable how much stuff Gary has collected back there. We were driving along in Spain, and out of nowhere Gary’s head popped up munching some cheese he clipped from a dressing room in France 3 days ago. At one point on the drive Leo jokingly says he could go for a Jagerbomb, and I’ll be damned if Gary doesn’t get one together for him. The Jager was from Switzerland. The Red Bull from Germany. The cup from a French gas station. Consequently, here we are with Leo knocking back a monster Jagerbomb in 85 degree heat on the Spanish tundra. The best part is if Leo had decided on something else, I think he would have been covered. I know for a fact there is red wine, white wine, sparkling wine, a 12 of beer, and maybe some leftover whiskey. The very back seat of this van is better stocked than a few of the clubs we have played!