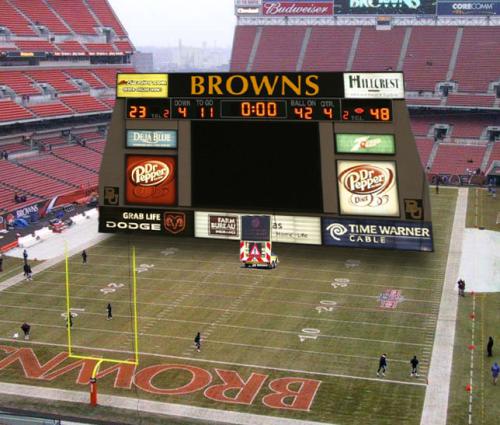 CLEVELAND, Ohio — After the NFL decides what to do about the scoreboard problem in Dallas, the league might have another quandary to look into regarding a similar situation in Cleveland, as the Browns have installed a scoreboard on the field of Cleveland Browns stadium to nullify the run game of their opponents.

"We decided that by the time the league looked into our scoreboard and decided what to do, we'd have already played the Vikings," said coach Eric Mangini. "To nullify Adrian Peterson with such a simple move was a no-brainer. Even if we're told to move it for games after. And there's always the possibility that it stays for the entire season."

With the Browns defense struggling with injuries and an overall lack of talent, the organization felt the wall of video and sound might very well be their most important addition on that side of the ball.

"Look, we're not a very good football team and we're not going to win many games," said Mangini. "At the very least, if the scoreboard on the field doesn't stop the opponent, our guys will have a good view of the Kiss Cam. You see that? That's quality entertainment."