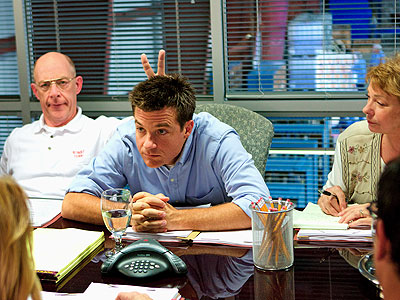 Mike Judge isn’t a great director. His previous films, Office Space and Idiocracy, have a pedestrian, amateurish quality that makes them look like high-school projects. But he does have a great ear for dialogue, something that was apparent even in the boneheaded Beavis and Butthead ’toon he scripted for MTV. His latest film Extract isn’t about to go head-to-head with the latest Judd Apatow project. But don’t dismiss it on that account; it’s still a funny, smart comedy.

Inspired by one of his mother’s cookie recipes, Joel (Jason Bateman) has turned a vanilla-extract factory into a million-dollar operation despite the fact that his employees are so clueless, his manager Brian (J.K. Simmons) can’t even recall their names and refers to most of them as “dinkus.” Despite his wealth, Joel isn’t a happy camper. His employees are morons, and by the time he gets home from work each night, his wife Suzie (Kristen Wiig) has already put on sweats and shows no interest in sex. So he and local sports-bar bartender Dean (Ben Affleck) — a self-styled “entrepreneur, spiritualist and healer” — concoct a plan to send a gigolo over to clean the pool and try to nail Suzie. If she goes for it, Joel figures he has every right to pursue an affair with a hot young temp (Mila Kunis) who just started working at the plant.

Well, Suzie goes for it and then some. It’s not long before the daft pool boy (Dustin Milligan) is making regular visits, even though Joel comes to his senses and tries to call the whole thing off. To make matters worse, an employee (Clifton Collins Jr.) injured on the job has retained a litigious lawyer (Gene Simmons) to sue the company, which means Joel’s not going to be able to sell the place as he planned. Bateman and Affleck are perfectly cast as the square and the hippie, and Judge’s writing is so strong, it makes up for the fact that the film hits a few lulls and isn’t nearly as mean-spirited and dark as the cult hit Office Space. In a summer bereft of “funny people,” Extract hits the mark.