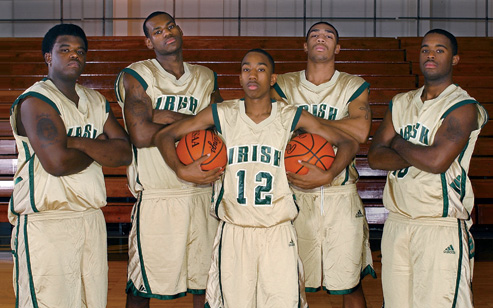 Following in the footsteps of Shaq and Michael Jordan, LeBron has signed on to a comedy-movie vehicle. It's being scripted by Lowell Ganz and Babaloo Mandel, who penned A League of Their Own and City Slickers. The plot will follow five regular joes who travel to Vegas to attend the LeBron James Fantasy Basketball Camp.

Ain't It Cool News a rundown of the details here , including the tidbit that James will executive produce along with his business partner Maverick Carter.

Expect a mob scene. The stores do, so they’re already establishing riot-control protocols.

The Friday Borders signing starts at 7 p.m., but they’ll begin handing out wristbands, starting at 9 a.m., to customers who buy the book. The store will give out a maximum of 600, which doesn’t guarantee a signature. And the King is only signing the book, no more than two copies, and no memorabilia.

The Saturday Barnes & Noble signing has a similar drill. The event starts at 2 p.m., but the store begins handing out wristbands at 7 a.m. If you’re not in line yet, get there soon.

And, yes, he did book-signings in New York first. — D.X. Ferris