NBA to Benches: Sit Down 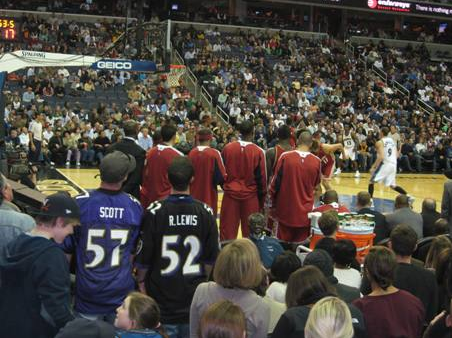 During the 2008-2009 campaign, the Cavs sported one of the tightest squads in the league. This was evident through their interactions on and off the court, and it manifested itself in myriad ways. One of the most noticeable (and, perhaps, annoying) was the bench cheerleader effect. See, when the game got tight, or the team went on a run, or a great play transpired, the bench would stand, often for minutes on end, and sometimes for an entire quarter.

At home, this wasn't much of a problem. While there might have been some complaints, the hometown fans had to give the boys some leeway as they were on their way to one of the best records in the league. On the road, however, this irked some fans — ya know, the guys that drop over $100 on seats behind the bench. Hard to enjoy the game, I suppose, if you're staring at Wally Szczerbiak's backside, though I'm sure Wally would say that's the appropriate price to pay for a gaze at his backside.

Anyway, that will all end this year. The NBA has deemed the practice verboten. From the Daily Herald:

The NBA finally stood up for fans rights. The league sent word that bench players are required to sit down unless they’re reacting to a specific, exciting play.

I made this suggestion early last season after noticing the Cleveland Cavaliers bench stood up for the entire fourth quarter of a Nov. 8 game at the United Center. The benchwarmers were caught up in a Cavs run early in the quarter, fine. But then they kept standing and standing — most with arms folded, starting blankly at the action on the court.

All NBA players should know there are people behind them who paid more than $100 a seat for the privilege of attending a game and contributing to their salaries. I think that’s covered in rookie orientation. In my book, standing for an entire quarter has nothing to do with supporting your team, it’s just being a jerk.

I find it hard to even muster the energy to take this guy to task for saying that guys on the bench getting excited for their teammates is a bad thing. To understate the importance of team chemistry during the season would be hard to do. And who knows whether the 2009-2010 squad would feel the same need to high five and dance and stand for minutes on end, but the important thing is, it's over.