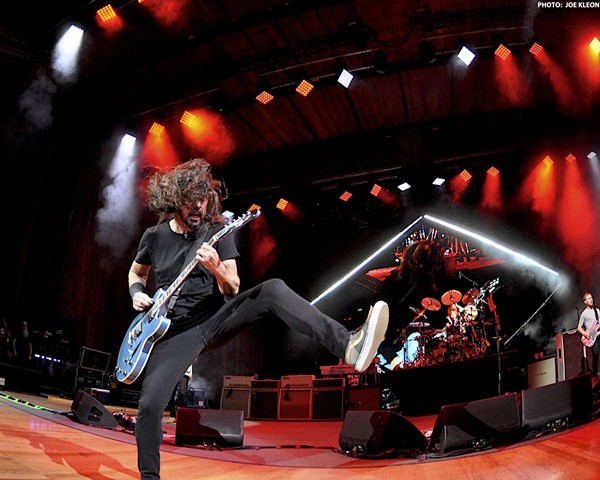 Joe Kleon
Last night at Blossom, the Foo Fighters kicked off their late-summer set at full deafening decibels with the band’s 2002 hit “All My Life,” a fiery anthem that front man Dave Grohl delivered with a raspy growl. Grohl’s long floppy hair was a drenched tangle of sweat by the end of song one. At no point did the band ease the crowd into the show. Each member came out swinging for the stars as seasoned professionals and definitive rock legends.

The opening song had the intensity of an encore number. Then, with hits like “Learn to Fly,” “The Pretender” and “The Sky is a Neighborhood,” it quickly became apparent that every song was being delivered like it was the final song of the night, hell even of the tour, maybe even of the band’s career. Grohl even made a joke to fans that band members were all going to go home and break up, and we would never see them again. That was met with the expected “NO!!!” from the crowd. Grohl chuckled, amused by the mere notion of such an unimaginable fate. He quickly assured the crowd that a breakup would not happen, that it would never happen and that the band would be together for “the rest of our fucking lives.”

Grohl moved like a Jim Henson creation that wished really hard and became a real boy. He bounced and thrashed his lanky body around like a muppet on Adderall. He opened his mouth and a guttural roar emerged from the depths of his everything. The entire band played with such energy, it was one magic mushroom away from morphing into Dr. Teeth and the Electric Mayhem.

By song five, fan favorite “Rope,” Blossom had been lifted so high it seemed as though everyone was levitating. And then, a platform beneath drummer Taylor Hawkins began to escalate, the giant contraption acting as a slow motion jack in the box, taking Hawkins above us all to deliver a manic, extended drum solo that zapped the crowd into a wide-eyed trance of disbelief. Hawkins looked like a smiley mellow surfer with his neon board shorts. But don’t let the hang loose vibes fool you because his long golden hair flowed in the breeze like Farrah Fawcett as he beat his drum kit into a bloody pulp, destroying percussion like a velociraptor. Hawkins then provided lead vocals to “Sunday Rain,” all the while continuing to drum away on his elevated throne.

Fittingly, up next was “My Hero,” with Grohl taking back center stage as Hawkins’ platform was lowered back down to the level of the rest of us mere mortals. “These Days” was delivered with a somber sadness, Grohl stripping all of his coolness away as he sang lyrics about the inevitability of death with an unassuming honesty. During “Walk,” he introduced some of his band members and then went into a cover of Alice Cooper’s “Under My Wheels.”

Perhaps the surprise highlight of the relentlessly magnificent set was a mashup of John Lennon’s “Imagine” with Van Halen’s “Jump,” Grohl singing the lyrics to “Jump” as the rest of the band played the melody to “Imagine.” The two rock classics being combined is the perfect metaphor for the Foo Fighters — the rough and raw rebellion of rock 'n' roll fused with the hope we can all live together as one.

Grohl invited lead singer Luke Spiller from opening band the Struts out on stage to sing a cover of Queen’s “Under Pressure” with Hawkins now center stage singing with Spiller and Grohl behind the drum kit. Spiller looked so much like Freddie Mercury with Mercury’s signature overbite and sparkling attire that it would have been believable to learn that he was merely a hologram of Mercury.

Then, it was time to turn the spotlight onto a fan when Grohl invited a young man named Lucas to the stage to play guitar for “Monkey Wrench.” Lucas was wearing a shirt that said in big letters BREAK A LEG, which was potentially a nod to Grohl’s infamous leg break during his last tour. Lucas wowed the crowd as the band backed him up. The good thing is there are so many guitarists in the Foo Fighters that even if a fan wasn’t that skilled, he or she could still maintain the illusion of keeping up as Pat Smear, Nate Mendel and Chris Shiflett played their guitars along with the fan. As the song went on, Grohl told the crowd, “This is great! I don’t have to play guitar!” as he swung around what appeared to be an open champagne bottle.

Up next was the amped up “Run” followed by 1999's “Breakout," which Grohl referred to as an "oldie." Before performing “Dirty Water,” Grohl played the role of the proud Papa as he pointed out a blushing young backup singer who just happened to be his very own 12-year-old daughter Violet. One could almost hear her “come on, Dad” inner monologue as she waved to the crowd, bashful and adorable in her Where’s Waldo-ish long sleeved polo and denim shorts, resembling the reluctant star of the next coming-of-age drama coming to a town near you.

If there was a textbook on how to deliver an insane rock 'n' roll show, the Foo Fighters would have written that textbook if it weren't so un-rock 'n' roll to write a textbook. In the presence of the heavyweights of mainstream rock 'n' roll, the crowd was continuously rocketed to the moon and then shot over to undiscovered planets to jam out for a while. Thousands of strangers became one collective hive mind, jumping and screaming like one singular being.

A raucous rendition of “Best of You” closed out the hit parade, but it wasn’t long until the band was back on stage to close out the night with “Everlong,” “Times Like These” and “This is a Call.” And just like that, the band was gone, and we were all left to stumble back to the endless sprawl of Blossom parking lots, heads swimming in a hazy metamorphic afterglow.
© 2023 Cleveland Scene