Multiple guests at the Akron FrightFest at Kim Tam Park are claiming a worker has been incorporating a "mock rape" scene as a scare tactic in one of the haunted houses.

FrightFest is advertised as the area's first R-Rated house, as one of its houses is a full-contact, 18+ over haunt that requires all attendees to sign a waiver before entering. However, things went too far for a handful of people who spoke with Channel 3 and Channel 5, as well as posting on the haunt's Facebook page.

"There was a man in a mask standing over my boyfriend, my boyfriend was on the edge and he was being pushed down," Sarah Lelonek told Channel 5. "[Lelonek] comes over and yells, stop, what are you doing? That's my boyfriend," said boyfriend Ryan Carr. "Not anymore, he's mine now I'm going to rape him and then he started thrusting against me."

Carr repeated his story on the haunt's facebook page, where he was met with immediate opposition by other attendees as well as whomever is in charge of the page and representing Melanie Lake Inc. at Kim Tam Park. 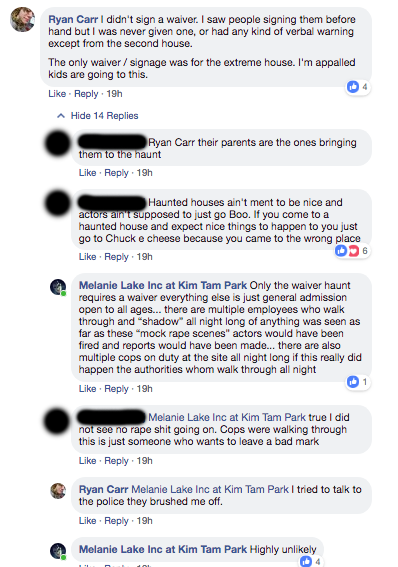 Lelonek and Carr claimed the incident did not happen in the waiver-required haunt, but at one of the all-ages houses where children would have been permitted. Unfortunately, they weren't the only ones claiming this scare tactic was being used by an employee. One Facebook user wrote, "It was 100 percent a rape scene," with another claiming, "They did have a mock rape scene in one of the houses."

One mother even posted a screenshot of the park's Facebook page owner's response to her complaining that her son had experienced the "mock rape" where the page owner treated the mock-rape accusation like an actual rape accusation, and immediately dismissed the victim and chose to believe it didn't happen. 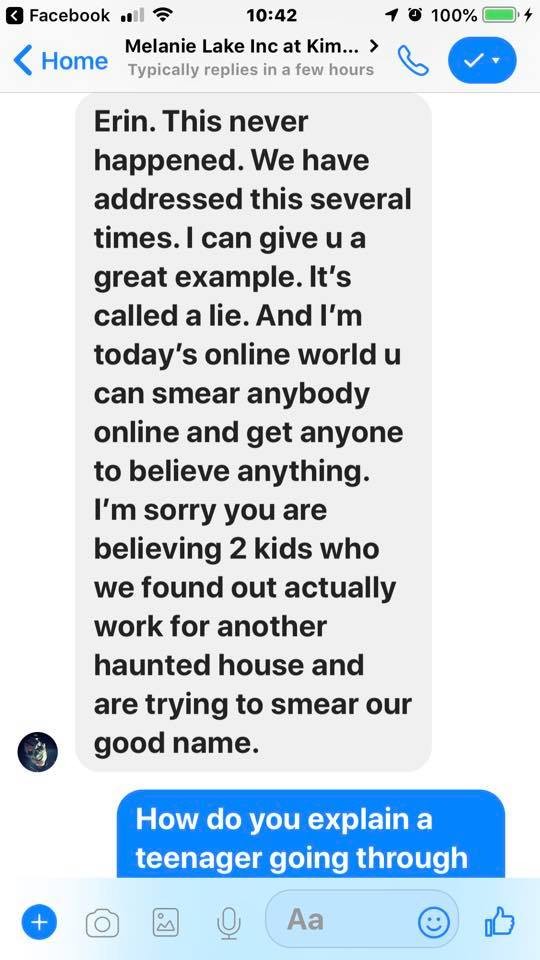 However, in recent hours, the park seems to have changed their tune by commenting things like, "The situation has been resolved statements will be released tomorrow regarding this matter."

An official statement has yet to be released, but from reading the Facebook accounts of how the park has been operating, it appears the company is actively choosing to remain ignorant. A shame, because this all could have been prevented had they just said "we're taking this matter seriously and are investigating."

We look forward to their statement.
© 2023 Cleveland Scene