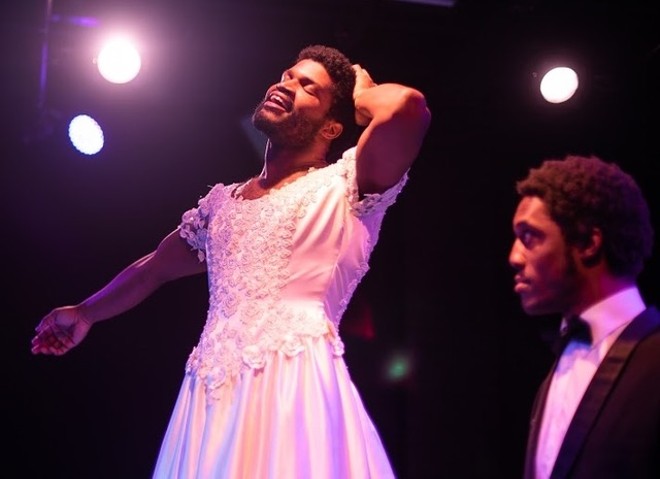 Before the review begins…
Allow me to note that I experienced something last week that I haven’t in more than 20 years of being a theater critic. Those of us in the audience at Convergence-Continuum were victimized by two young, um, ladies among the small audience who were sucking down purse-size bottles of wine and braying their inane comments about the play at a volume that competed with the actors. Since the playing space at Con-Con is very intimate, this caused several audience members to glare at them and ask them to be quiet, which the women responded to with scorn and insults. They even interrupted director Clyde Simon’s customary post-show comments.

As I say, this has never happened before in the more than 2000 shows I’ve attended in the past two decades.

Ahem. That said, This Much by John Fitzpatrick is an interesting one-act that aspires to confront the concept of marriage, fidelity and deception through the interactions of three young gay men. And the fact that it doesn’t quite work is not attributable to the actors, who acquit themselves well.

Anthony and Gar are living together and are reasonably happy, it appears. But right from the start, there’s a rift since Gar meets up with Albert, first in a store and later in a park. You can pretty much write the rest of the play from here, as Anthony and Gar’s marriage is damaged when Anthony plays some messages on Gar’s phone and hears Albert requesting another get-together with Gar.

As for the relationship between Anthony and Gar, it is drawn in the starkest of terms. Sweet Anthony dutifully and obsessively cleans their apartment while trying to compel Gar to behave. But loose cannon Gar is off exploring his sexual options.

All three actors wear soft ballet slippers and move expressively to music at certain times. But these lyrical moments are not connected in any meaningful way to everything else that is going on. It is a rather pleasant staging quirk in search of a reason to exist.

Fitzpatrick actually has some interesting thoughts about relationships, between lovers and among gay men and their parents, but these are often lost in the welter of dated gay memes. Sadly, playwright Fitzpatrick chooses to deal in gay clichés for much of the play—the easy and dangerous sex (the Gar and Albert spontaneously display their genitals to each other in the park), the casual lying, and the desperate possessiveness. A little switcheroo near the end doesn’t ring at all true ir insightful.

The cast under Simon handles this material as well as could be expected. As Anthony, Daryl Kelley is a rock of rationality and he doesn’t make a single misstep. Wesley Allen is appropriately randy as Gar and hits his peak when he dons a wedding dress after the ceremony and later at his father’s funeral. As Albert, Maximillian Winer is a bit of a non-entity, which is entirely the fault of the script.

The play doesn’t live up to the promise that is expressed in the subtitle, and that’s too bad. But what is worse is when two people in the audience think it‘s okay to talk at high volume through a performance in a space that holds 30 or 40 seats. The barbarians are at the gates, again.

This Much (or An Act of Violence Towards the Insititution of Marriage)
Through November 3, produced by Convergence-Continuum at The Liminis, 2438 Scranton Rd., 216-687-0074, convergence-continuum.org.
© 2022 Cleveland Scene