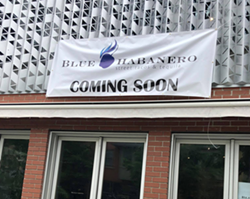 Detroit Shoreway Twitter
Gordon Square welcomes another new dining option tomorrow when Blue Habanero (6416 Detroit Ave.) opens its doors in the spot most recently, and briefly, occupied by the Arcadian.

Owner Rafael Ayala, who also runs Tres Potrillos locations in Akron, Medina and Beachwood, has been working to tweak the space since signing the lease this summer.

As the name suggests, the menu (check it out on Facebook here) is heavy on the tacos, with 15 varieties (three per order plus a side) that run $13 to $15, alongside a handful of entrees including seafood al ajillo, carne asada and pollo con calavaza. There are also the familiar bowl options and appetizers than span from chips and guac to nachos to bacon wrapped shrimp and stuffed jalapeños.

Ayala told us earlier this year the focus would be on high-quality ingredients and fillings and top shelf booze and real juice instead of mixes.

Blue Habanero opens for lunch tomorrow at 11 and a live mariachi band will be on hand for the evening's dinner hours.
© 2022 Cleveland Scene