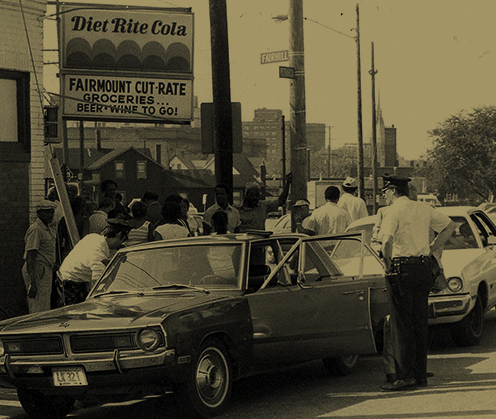 The street corner that changed Ronnie Bridgeman's life is nothing much to look at: just a bent elbow of sidewalk where Stokes (formerly Fairhill) Boulevard and Petrarca Road meet south of University Circle. The curb is scuffed after years of close parking jobs, cracked here and there from summers past, when weeds won out against the concrete. The frayed wooden trunks of streetlight poles keep the drive-by vigil with a fire hydrant.

Bridgeman stands on the traffic-swept corner, his boxer's hands holstered in jacket pockets. The sun is just starting to punch through the low canopy of March cloud cover. Overnight, Cleveland was jumped by an unexpected snowstorm; now the surrounding streetscape wears a fresh half-foot of powder.

To Bridgeman's left stands a church that, according to the lock on the door and the spiderwebs across the front steps, hasn't seen a Sunday service in some time. He nods at a patch of overgrown weeds next to it. "That's where the store was. Right there."

Turning around, he throws a finger at a mosque across the street. "That's where the flower shop was, and over here," he says, pointing down Petrarca to a row of multi-story homes, "is where we all grew up."

Despite those roots, Bridgeman has managed to put miles between himself and his childhood home. He lives across town now, and he doesn't keep in touch with old neighbors. Legally speaking, he isn't even Ronnie Bridgeman anymore: It's not the name on his license or what his wife or co-workers call him. But this street corner's been lodged in his mind for 35 years, the ground zero around which his world still spins.

According to the State of Ohio, a 17-year-old Bridgeman was standing on this spot at 4 p.m. on May 19, 1975. His best friend was there too, and his 20-year-old brother was waiting down the block in a getaway car. According to their criminal records, they were responsible for the blood that soaked the sidewalk that afternoon.

It didn't matter that none of them had previous records, or that no physical evidence linked them to the crime. When they were put before juries, prosecutors produced a single eyewitness tying them to the incident: a 13-year-old-boy with bad eyesight.

All three were convicted. Bridgeman pulled 27 years and eight months of hard time; the other two remain incarcerated. Each maintains they had nothing to do with what happened that day.

Now 53, Bridgeman is clinging to an athletic air, with a large frame you wouldn't want to post up against in a pick-up game. His head has the color and contour of an 8-ball, his beard dusted with white. He is quiet and thoughtful, answering questions only after much deliberation, as if he carefully gets under the hood of every sentence before sending it out into conversation.

"My mother, who was very religious, told me, 'Trouble is easy to get in but hard to get out. But if you're not guilty of anything, the truth will set you free,'" Bridgeman says.

"But that won't work with the law."

Ronnie woke late in the morning at his house on Arthur Avenue, an address he shared with his three siblings and ill mother. Around the block, Ronnie and his brother Wiley — the two were called "Bitsy" and "Buddy," respectively — were known as good stock: kids who stayed out of trouble and took care of their mom, the kind of guys parents liked to see their daughters hanging around. On that morning, Ronnie was out the door after breakfast and quickly met up with Ricky Jackson, his best friend and neighbor.

Neither work nor school were on the schedule. Ronnie had made it through the ninth grade before jumping ship for trade school, where he studied to be a welder. By now, he was logging weekly shifts as a porter at a restaurant downtown. Eighteen-year-old Ricky had dropped out to join the Marines. But now he was back scouting for work, after an honorable discharge for health issues.

The two spent the day ambling around. The weather was good and hot: spring souring into summer, the type of blue-sky day that draws neighborhood moms out on their porches. First they hit a school playground for a couple hours of pick-up basketball. Next, they gravitated back to the Bridgeman house for a game of chess. Out front, Wiley was washing his car, a white '71 convertible; later, he ran errands for some neighbors.

At one point in the afternoon Lynn Garrett dropped by, a straitlaced kid from the neighborhood who grew up with the Bridgemans. They were practically kin; Wiley and Ronnie even called Mrs. Garrett "Mom." Unlike his friends, Lynn had stayed in school and landed a football scholarship to Bowling Green. He was a walking, talking example of how a guy could ride the classroom out of the neighborhood.

By 4:00, school kids were walking the sidewalks homebound from the bus stops. As Ronnie, Ricky, and Lynn stood outside the Bridgeman house, someone passing by said there'd been a robbery at the store up at the corner of Fairhill and Petrarca. A white man had been killed. Word buzzed through the street; people were peeling off their porches and heading for the store. Lynn left to visit some friends in another neighborhood. Ronnie and Ricky decided to go see what it was all about.

Back then, news quickly pedaled through the neighborhood, a small slice of the East Side squeezed between Cedar Road and the rail lines to the south. It was made up of three short blocks — Frank and Arthur Avenues, and Colonial Court — that ran against Petrarca to the east.

The area was mostly safe, say former residents. The families were working-class and black, most anchored by single mothers. Everyone knew everyone, and the branches of family trees tangled: Chances were good you were a second cousin or half-sibling with someone up the block or down the street. Kids would leave home in the morning, roam the blacktop and lawns all day, and be inside for supper. When trouble broke out, the guilty parties were an easy mark: Even if your mom didn't see it, there were 50 others on watch for any misbehaving.

But as the mid-'70s rolled in, the neighborhood's good vibes were starting to go bad. Sons began meeting their mothers at the bus stop at night; the Fairmount Cut-Rate — the area convenience store — was robbed repeatedly. But regardless of the slight sea change, the streets around Fairhill were safe enough on May 19 for 16-year-old Karen Smith to make an after-school trek to the Cut-Rate by herself.

Smith was an honor student at John Hay High School, just finishing up her sophomore year. After she came home for the day, her mother asked her to run up to the store. At around 3:40, she took off from Colonial with three empty glass pop bottles under her arm. As she rounded the corner and headed up Petrarca, she spotted two young black men up the street leaning against the Cut-Rate. One was drinking from a bottle, the other held a paper cup. She didn't recognize either of them.

As Karen closed in on the store, her nerves started rattling. Neighborhood men were always cat-calling after women — especially 16-year-old girls on their own. To her relief, the strangers only nodded as she neared the door.