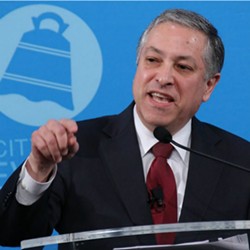 @TheCityClub
The U.S. Marshals today released a scathing report on the operations inside the Cuyahoga County jail. County executive Armond Budish had asked for a review and report following a string of seven deaths in the facility this year as well as numerous concerns voiced by staff. Former jail director Ken Mills resigned last week in advance of its public release.

The report, which you can read in full below, is lengthy and blistering, detailing a dangerous and overcrowded facility where inmates' Constitutional rights are routinely violated, where the general health and well-being of the inmates are routinely ignored, where food is withheld as punishment, where officers festooned in SWAT gear intimidated and threatened inmates, where those same officers verbally abuse inmates and used excessive force, where inmates are locked down for 27 hours at a time, where basic levels of hygiene and sanitation are not met, and where staff lacks adequate training.

That Budish and the Sheriff's office could even profess to claim that they were unaware of the situation is baffling, but Budish, in a statement, said that routine inspections by the state of Ohio revealed compliance and, in fact, high marks.

That is not what the Marshals found, giving unsatisfactory ratings across the board in every area they investigated at the facility, which was built to house 1,760 inmates but which currently houses some 2,420.

"This must change, and it will change," Budish's statement continued. "It’s my plan to develop and implement a comprehensive plan to improve safety in the jail, addressing the concerns detailed in the report. We have already made some of the recommended changes. Some of the concerns in the Marshals’ report can be quickly cured, like the need to practice fire drills. Other issues will take longer to address. We will closely review the Marshal’s report and prepare a comprehensive plan to ensure the safety of prisoners and staff in the jails."

George Taylor, who was named interim jail director after Mills' departure, said in a statement: "As most of you know, I am new to this position, but I have deep experience in the law enforcement and corrections areas. Job number one for me is to address the concerns in this report. Just like the Sheriff and the County Executive I want to make sure that our jails are safe and secure.  My plan is to work for the Sheriff and the County Executive to run down these issues and to come back with a plan to address them. I will be prioritizing areas in two ways – the first, what conditions might exist that could be unsafe either for our staff or for our inmates, and second, what is easily addressed; what can we get to immediately? I commit to you that I and the Sheriff will be back with a report on changes and improvements."