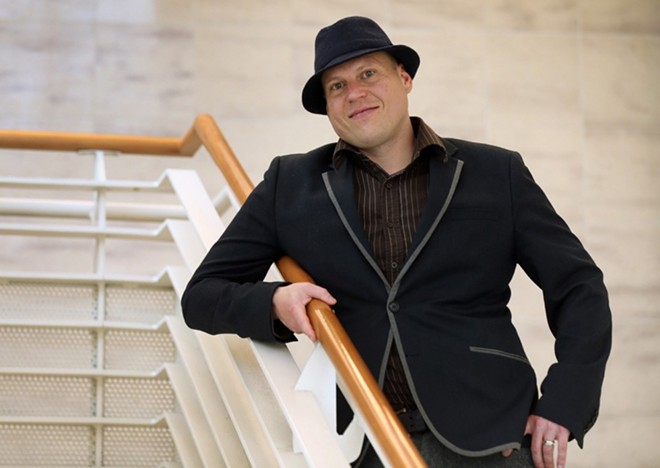 He is now a Vice President for Strategic Insights at the Unify Project, the "high-tech nonprofit" that was central to Cleveland's Amazon bid before it existed in any meaningful sense.

The nonprofit's mission has revolved around using advanced technologies — things like machine learning, artificial intelligence and blockchain — for social good.

"We are creating, aggregating and analyzing a diverse data set using leading­-edge methodologies and technology," the website now says. "The new analytics and knowledge generated by the Unify Project can drive better decision­-making about how to best invest and align resources and policies in all sectors to achieve both sustained economic and individual success."

In a conversation with Scene Tuesday, Piiparinen said that he could not say much publicly about his role with Unify, but that it included "mental mapping." He said a model, presumably for data aggregation and analytics, was in development and that there would be more to say in a couple of months.  The nonprofit now has 12 listed employees, not all of whom work full-time, and 11 available positions, most of which are related to software development and data science.

The site confirms that Unify is in "development mode." Back in May, co-founding director Jim Hickey told Scene that the nonprofit was in "startup mode." We are now well over a year, in any event, since it was described as "the most broad-reaching effort ever mounted to use big data, artificial intelligence and machine learning to end poverty," a project which "brings together the brightest minds in medicine, education and philanthropy," and which "offers a dynamic opportunity to utilize Amazon expertise, technologies and cloud capacity, and to collaborate on the world's most ambitious urban renewal effort."

Reflecting on his time at CSU, Piiparinen said that he was proud of his work, the main thrust of which was research on the region's changing economy. He said his goal, initially, alongside research partner Jim Russell, had been to "get beyond 'booster' vs. 'buster" and to "establish a good, robust theory of change in Rust Belt Cities."

His most recent paper, "The Healing Economy," focused on the health-tech corridor and suggested that the region should not only prioritize solidifying its role as a "knowledge cluster" in healthcare, but should work to become a "knowledge hub." That would mean, per the paper, attracting "star scientists" in "frontier fields."

Highlights from that paper's abstract are likely what got Piiparinen noticed by the Unify Project.

"The analysis speculates on a potential 'long game' for Cleveland in terms of developing an R&D hub in a frontier field looking specifically at healthcare analytics," the abstract reads, (italics mine). "Due to regional assets, Cleveland can be a global node in population health research, in effect developing a data capital and AI/machine learning ecosystem that creates leading knowledge in the social determinants of health and reduction of health disparities."

In one interpretation, the Unify Project can be read as the organization making good on this prescription, as the nonprofit cultivating the data capital ecosystem mentioned above.

Piiparinen said he left CSU on good terms and that the Levin School, particularly Dean Roland Anglin, had been supportive of his work throughout his tenure, which began in 2015.

Will Dube, CSU's Director of Communications and Media relations, told Scene that the University would likely begin its search for a new director "within the next month."

"Richey did a fantastic job," Dube said. "The Center's research portfolio has been very effective, and we're excited to find a new leader who can continue that effort."

Dube said that the Center would no doubt still pursue research projects related to demographics and urban centers, but that the specific direction of the research would be based in large part on the expertise of the new director.
© 2022 Cleveland Scene