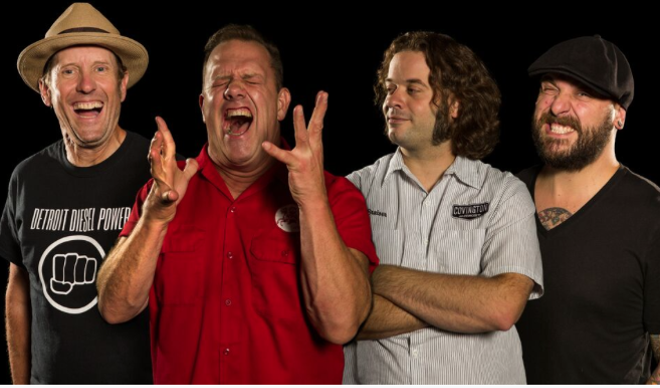 Mardi Gras is a New Orleans tradition, but the New Orleans-based rock act Cowboy Mouth will bring some of the event's flavor to Northeast Ohio tonight. The band has played more than 3,000 shows to over 10 million fans. Back in the 1990s, the group inked a major label deal and had a hit with the careening "Jenny Says," a catchy tune that got airplay on commercial radio. In addition to spreading some Mardi Gras-inspired cheer, tonight's show also supports a new EP. (Jeff Niesel) 8 p.m., $25-$35. The Kent Stage.

Into the Blue: Grateful Dead Revival

Regardless of your take on the Grateful Dead, the band to which Into the Blue, an ensemble of local musicians pays tribute, the group maintains a damn important stature in the rock 'n' roll canon. Into the Blue revives that spirit and lends it the respect Jerry and Co. rightfully deserve. Anyone interesting in hearing — and seeing — great music flow from the stage should check out what these guys are doing. Fellow musicians and artists will glean inspiration. (Eric Sandy) 9 p.m., $11 ADV, $13 DOS. Beachland Ballroom.

Massillon native Patrick Sweany used to regularly play Northeast Ohio’s indie rock clubs. Since moving out of town several years ago, he hasn’t been as much of a presence, but that doesn't diminish his talent. Produced by Grammy-winning producer Matt Ross-Spang, Sweany's latest effort, Ancient Noise was recorded at the Sam Phillips Recording. Ross-Spang also recruited Al Green's longtime keyboard player Charles Hodges to play on the disc. Sweany and Co. cut the sessions with no pre-production rehearsals with the band, so the songs have a real immediacy to them. (Niesel) 8 p.m., $12 ADV, $15 DOs. Music Box Supper Club.

Given that it takes place the day after Valentine's Day, this show featuring two local acts revolves around the theme of love and will feature a custom setlist of both unique originals and select covers. The bands share a connection in that Wildflowers guitarist J.T. Sanfilippo is the son of Armstrong Bearcat's Butch Armstrong. Both acts regularly hit up the Cleveland Blues Society's weekly jam nights too, and they should complement each other well at tonight's gig. (Niesel) 7:30 p.m., Stella's Music Club.

Singer-guitarist Jonah Koslen has lived in sunny Southern California for the past five years, but he has deep ties to Northeast Ohio. After attending Beachwood High, he started up a band called Snake Eyes and then joined the Michael Stanley Band in 1974. He loved playing with Stanley, whom he still considers to be a friend, but got restless and wanted to start his own damn band, so he left MSB and launched Breathless in 1978. The following year, the group released its self-titled debut. It would become a hit. To mark its 40th anniversary, Koslen will revisit the album and play it in its entirety at tonight's show. (Niesel) 8 p.m. Music Box Supper Club.

While singer-songwriter Anderson East didn't cut his latest album, Encore, live, the songs have a real immediacy to them. The swinging, horn-driven “Girlfriend,” a track with the late Avicii, suggests how open East, who sounds particularly souful on the song, is to collaboration. In addition to the alt-country trappings, the track features a great synth solo. For the live show, a backing band adds some serious punch to the tunes. East comes from a country tradition, but he's recently embraced soul, blues and old school R&B. (Niesel), 8 p.m., $22 ADV, $27 DOS. House of Blues.