Be a Better Real, or Fake, Irishman

For one day of the year — or two, if you've found a really good party — every one of us is an honorary Irishman. But if you're going to pass yourself off as authentic Cleveland Irish, you'd better get to know a few of the key mileposts that mark your heritage. Read up, drink up, and be merry.

The first wave of Irish immigrants arrived in Cleveland around 1820, though their numbers didn't grow significantly until very bad potatoes drove them here en masse in the late 1840s. Interestingly, this same phenomenon also drove thousands of Hardee's customers to McDonald's back in 1983.

The first Cleveland Irish were instrumental in building the Ohio & Erie Canal, which paved the way for Hot Topic and other forms of mass commerce in the region.

Most early immigrants were farmers hailing from County Mayo in western Ireland, where they were already very good at being dirt poor. Upon arrival, most took up labor in the shipyards or steel mills, with a privileged few earning similarly miserable work aboard cargo vessels.

Most Irish settled around the marshy banks of the Cuyahoga River's mouth, particularly on the bend of the river known as the Angle. By 1830, they had a distillery there, which prompted the name "Whiskey Island" and the realization that drunken Irish people cannot tell what an island actually is.

As the number of Irish swelled to several hundred by the mid-1820s, Cleveland natives grew discontented with the substandard version of English that had been foisted upon them and the poor manner in which the Irish behaved themselves in public. This continues to be a widespread problem today.

The first Irish church in Cleveland was called St. Mary's on-the-Flats on Columbus Road. Christened in 1826, it was torn down in 1886, though Bishop Lennon probably would have whacked it by now anyway. 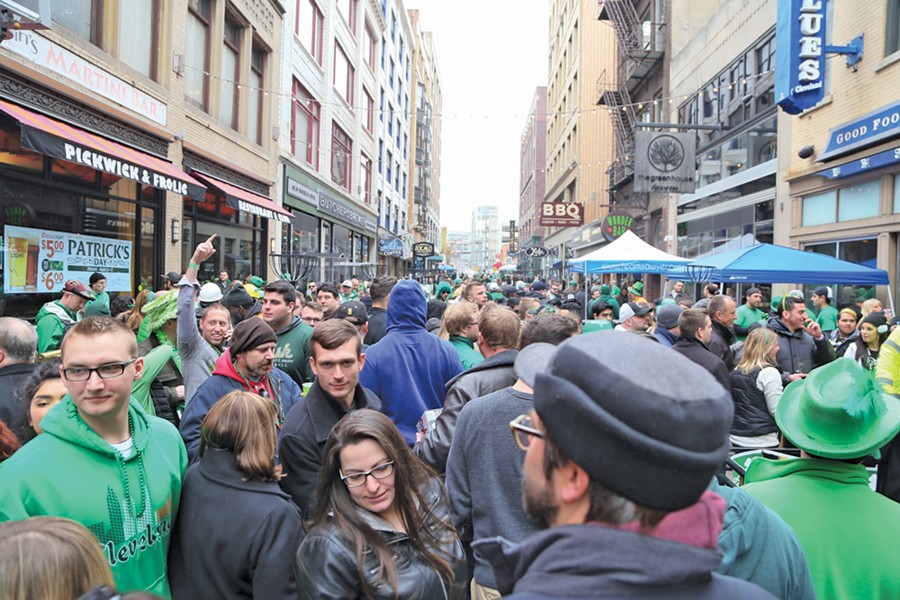 Photo by Emanuel Wallace
A crowd gathers for the downtown parade.

In 1847, a French missionary named Louis Amadeus Rappe became the first Roman Catholic bishop in the north of Ohio and a staunch protector of the woebegone Irish who had settled here out of desperation. His efforts led to an influx of priests and cash to the region, which means that, yes, Irish Clevelanders: French people actually saved your ass once.

In 1853 and 1854, Bishop Rappe created two parishes: one on the east side of the Cuyahoga (for mill workers) and one on the west (where most Irish lived). The eastsiders eventually assimilated into eastside suburban culture, which is why we have crap like corned beef burritos today.

By 1870, the Irish population in Cleveland had reached its peak of about 10 percent of the total population, with some 10,000 displaced Irish calling the region home. Today, some 172,000 Cuyahoga County residents claim Irish heritage, though only 67,000 of them hold political office.

By 1970, the region's Irish had scattered such that no true Irish neighborhoods remained. Also, you couldn't find a pint of Guinness to save your life, and everybody was drinking something called "Hillbilly Joose." And don't get us started on the pants people wore back then. Jesus.

By the mid-1970s, labor leader and freelance mobster Danny Greene cemented his reputation as one of Cleveland's all-time great Irishmen, which really isn't saying much for the rest of you.

Happily, rich vestiges of Irish culture remain today, most notably in the form of beautiful churches that people aren't allowed into, plentiful bars with names like The Flying Shamrock, and shopping carts full of cheap green crap sold on the streets of downtown every St. Patrick's Day.

The first Cleveland St. Patrick's Day parade is guessed to have taken place in 1867. In the early years, the parade marched through the near- westside (from the Flats to Detroit-Shoreway) where the region's Irish immigrants were concentrated. The songs and dancing were organized by the Order of the Hibernians.

The Order of the Hibernians is America's oldest Irish fraternal organization, founded in 1836.

Photo courtesy of the Cleveland Memory Project
Festive dancers in 1939

In 1912, more than 100,000 people traveled to Cleveland for the St. Patrick's Day parade to welcome home local boxer Johnny Kilbane, who had just won the world featherweight championship in Los Angeles. (He would retain the title until 1923.) To date, the 1912 parade is one of the biggest and most well-attended in Cleveland's history.

Every year, a Grand Marshal is chosen to preside over the Cleveland parade. This is an honorary title given to a man — usually a senior — who has contributed to the advancement of Irish activities in Cleveland. This recognition has been part of the ceremony since 1935. Since 1963, a "Mother of the Year" has been recognized as well. This honor is given to "a woman whose life has reflected credit on the Irish nationality."

WE KNEW THEM WHEN!

Cleveland Irishman and mid-century TV celeb Phil Donahue was a member of the first graduating class of St. Edward High School, in 1953, and then went on to attend that paragon of Irish collegiality, the University of Notre Dame. 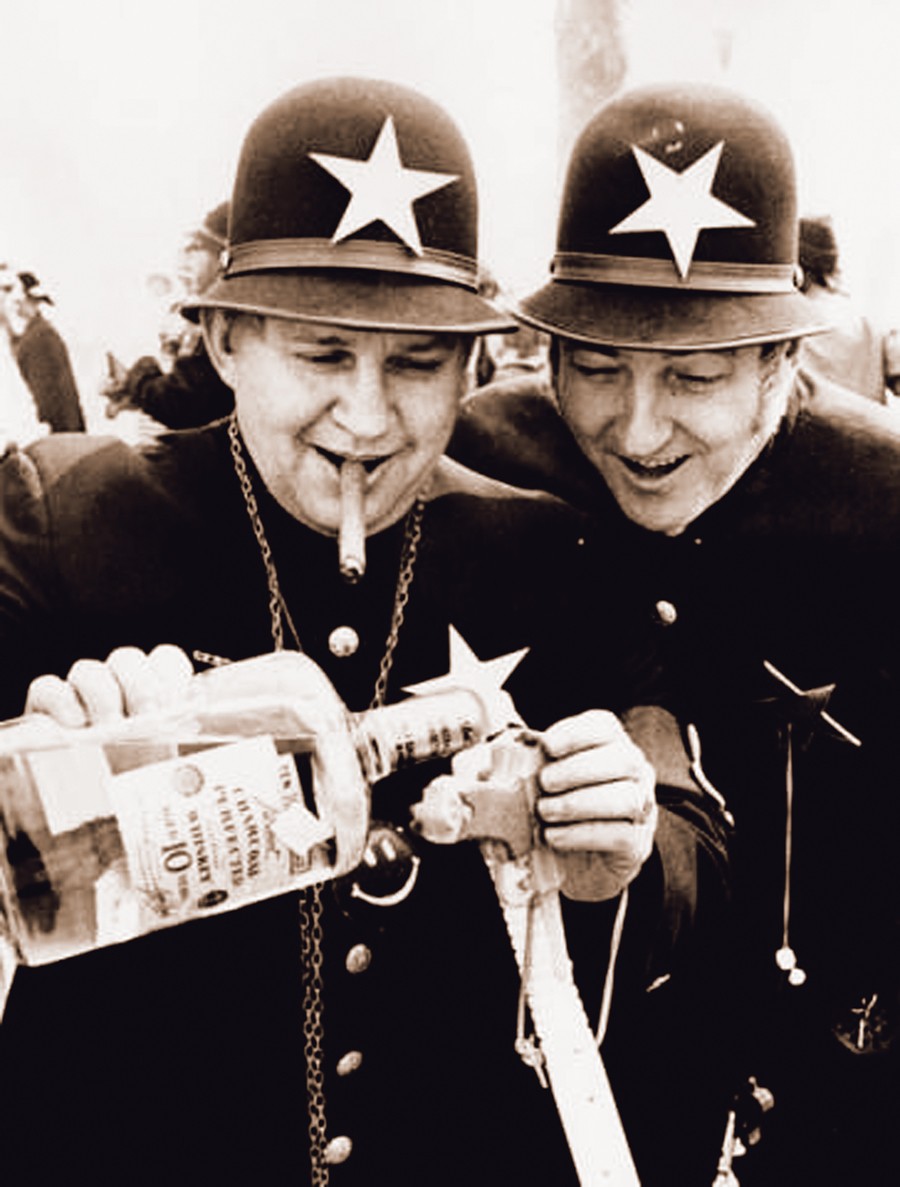 Clevelander Anne O'Hare McCormick was the first woman to join the New York Times' editorial board and the first woman to win a major category Pulitzer Prize (1937). She cut her teeth as an associate editor of the local religious rag the Catholic Universe Bulletin.

Irish-American mobster Danny Greene started his own crew of underworld enforcers he called the Celtic Club back in the '70s. He did battle with the local Italian mafia and set off a violent mob war that resulted in 35 car bombs erupting in the streets of Cleveland during the conflict. (The "Irish Car Bomb," coined in 1979 in Connecticut, was inspired by both the sectarian violence in Ireland at the time and Cleveland's own street wars.)

The 2011 film Kill the Irishman was actually filmed on location in Detroit. Actor Ray Stevenson, who played Danny Greene, said at the time that Detroit of the '00s resembled the economic hardship of Cleveland in the '70s.