A Town Built on Beer 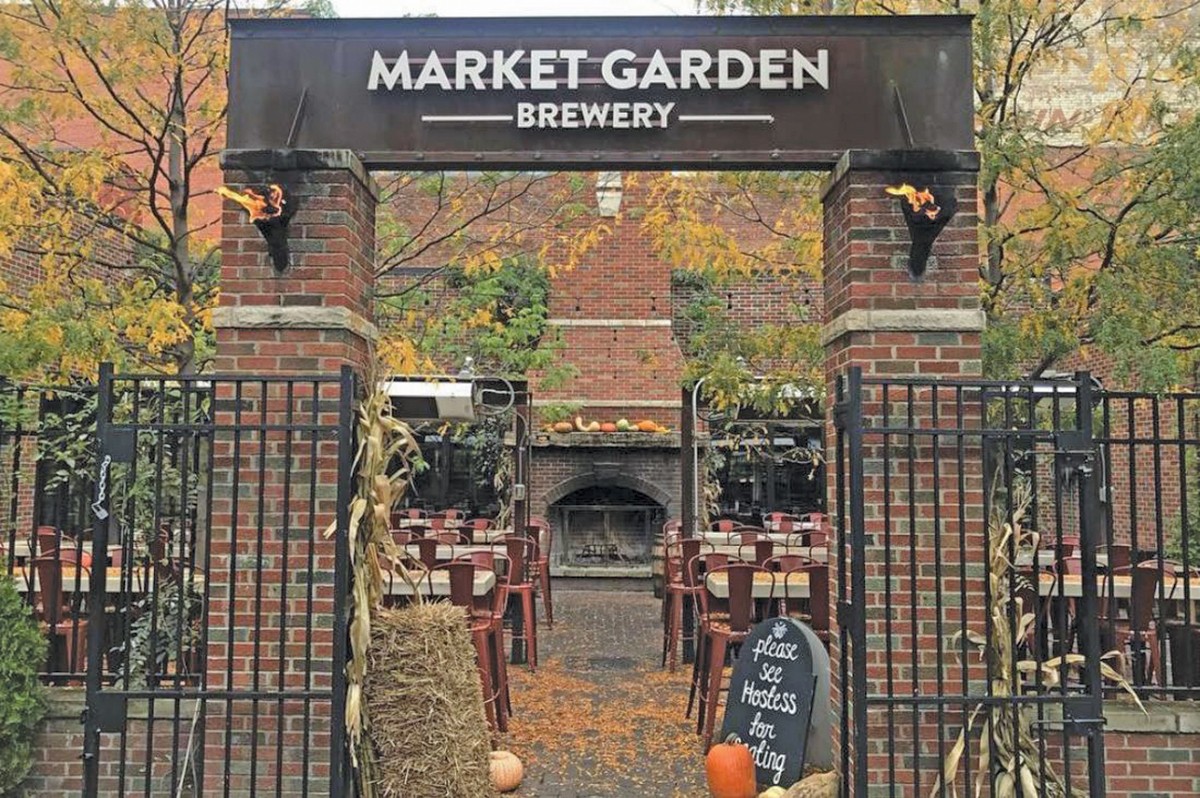 The craft beer boom shows no signs of slowing down, as evidenced by the seemingly unending new shops opening from east to west. And that's welcome news, for Cleveland is a town that loves its beer. And no matter where you find yourself, you're bound to be a few minutes away from a choice brewery.

This brewery, located in Duck Island, between Tremont and Ohio City, recently updated its beer hall and started hosting live music nights in addition to their story club, improv group and cinema group. Try a flight so you can sample all of their delicious beers.

In 2017, Terrestrial opened, bringing the first brewery to the Battery Park neighborhood. In addition to having fantastic beers, they're very dog friendly, so be sure to bring your furry friend (just don't give him/her any beer.)

Joining the bustling Ohio City brewery scene, this brewery, started in Cincinnati, was a welcome addition to the scene when it opened in late 2017. Located in the former Weenie a Go Go space, the taproom has up to 18 beers on tap and serves food from their neighbors Ohio City Burrito and Pizza Whirl.

This Cleveland Heights brewery feels more like a community gathering place than a bar. Live music, board games, community tables and no televisions gives it more of that living room feeling. And the beer is delicious.

In a town lauded for its craft beers, the contest for "Best Local Beer" is a tough one. But Willoughby Brewing Co., which has been slinging its Peanut Butter Cup Porter for years now, is no slouch. The eastside staple consistently ranks high on lists of our favorite breweries in town and the most underrated gems around here. You'll always feel welcome when you slip into a booth at Willoughby.

Thirsty Dog originally started as a brewery in Akron before expanding to Cleveland. In October of 2017, they opened in the space previously occupied by Crop Rocks in the Flats and took over a space where you can put your feet up, grab a freshly brewed microbrew and watch the barges going by on the Cuyahoga.

This "self-serve" pizza place and brewery is one of the shining gems of the new and improved Hingetown neighborhood of Ohio City. The former machine shop boasts a giant space that can fit close to 200 guests. They always have five or six beers on draught, with a current focus on sours and fruity beers like their Peach Guava American wild ale. The menu is designed around the famous New Haven, Connecticut style pizza.

Two sets of brothers, who are also cousins with each other, and their fathers, decided to open a brewery in Westlake in 2016, which just is so quintessential Cleveland. While this place is fun to eat and drink at all year round, the patio in the summer, being dog-friendly, with live music, corn hole, food trucks and more, is a huge draw here. And their summertime beers are perfect for the occasion, like their Lavender Wit, a Belgian-style white ale, and their Tangelo Fruit Haze, a tasty hazy fruit IPA that blends grapefruit and tangerine.

If you love railroads and trains and you love beer, there's no better brewery around. Beer comes out of old railroad spikes and their two signature beers, the Red Caboose amber ale and the Coal Train stout, are worth the ride.

The Ohio City-based brewery owned by Justin Carson and Paul Benner debuted with a wee 3-barrel system in the summer of 2014. Six months later the team upgraded to its current 10-barrel system, supported by a battery of new 15-barrel fermentation and conditioning tanks. It's a microbrewery that feels like a bar you just want to chill at for hours.

In a quieter part on the city on the edge of Downtown sits Noble Beast, one of our favorite breweries in town. Their Imperial Cookies and Milk Stout is a real standout, as is their Catchweight Kolsch. The Corndogs, long the greasy fair staple-on-a-stick, get such an upgrade at Noble Beast Brewing that they almost have nothing in common with the classic, apart from the skewer.

This brewery and taproom, located in Kamm's Corner, definitely lives up to its name by catering to the working class. Wednesday is a great night to visit if you're in to trivia. And while we'd recommend getting a flight of beer at most breweries, this one is really the place to do it so you can sample a myriad of their delicious brews, which are mostly named after blue collar professions.

In 2013, Thrillist named this local brewery's burger as one of the best 33 burgers in America. If that's not enough of a reason to hit up this microbrewery, pair one of Nano Brew's award-winning burgers (or sliders) with any of their 24 draft beers — they've got you covered until 2:30 a.m.

If it's true (please let it be true) that man can survive on a diet of just pizza and beer, then Masthead Brewing Co. has all the requirements necessary to sustain life. But more than that, this two-year-old brewery has injected a much-needed jolt of life into an area of downtown Cleveland that desperately needed it.

This Ohio City brewery, one of the most popular microbreweries in town, is another great spot to enjoy a cold, locally brewed beer. An Ohio Beef Burger and fresh baked pretzel goes great with any of their beers.

Located on the Case Western campus and run by it's students, this brewery has really grown in popularity recently. The kitchen is mainly a la carte, but on Sundays, they have all you can eat boneless wings and french fries for just $9.95.

In addition to their brewpubs in Canton and North Olmsted, the brewery recently opened a 75,000 square foot space in Middleburgh Heights that is sure to blow your socks off. 20 taps dispense award-winning Fat Head's creations like Head Hunter IPA, Bumble Berry Blueberry Ale, Sunshine Daydream Session Ale and Goggle Fogger Hefeweizen along with pub-specials from a smaller R&D brewhouse on site. Another 10 taps are set aside for guest beers, ciders, meads and nonalcoholic beverages like root beer.

Zack Bruell's brewpub in the East Bank of the Flats was recently named the best brewpub in the country, according to USA Today's 10Best Readers' Choice Awards. The combination of the exquisite views, the locally sourced menu and home brewed beers all contributed to that lofty ranking.

Butcher and the Brewer

This East Fourth spot, known for their brewpub and their butcher shop, has been a popular spot since opening in 2014. Their meats, which are aged and cured in-house are fantastic and their house smoked corn dogs coated in buttermilk batter are another standout. And their Stop-Hop-Kaboom IPA is one of the best IPAs in town.

It took owners TJ Reagan and Chris Frate two years and more than a few wheelbarrows of cash to open BRIM, a stunning white-brick-and-glass structure that looks like a refurbished warehouse on the edge of town. But all that planning led to this being the brewery that may boast the best food out of all of them. And the brews are very good as well.

This brewery fits perfectly into the low-key vibe of the Columbus Road Peninsula neighborhood of the West Bank of the Flats. The interior feels like your neighbor's really cool garage and the beers are really fantastic, especially the Noble Saison, which is blended with Riesling wine. This is the perfect spot before heading to a show at Nautica (or whatever the hell it's called these days.)

Casual, inexpensive, and family-friendly, this little brewpub dishes up a big assortment of smoked and barbecued meats, along with homemade soups, salads, sandwiches, and entrées. Pulled pork is a particular fave — for a change of pace, try it in the barbecued spaghetti! There's also a rotating selection of 24 beers on tap.

After a few year vacancy left by beloved Lemon Grass, Boss Dog took over the space and opened to much fanfare in late 2017. The microbrewery is the standout but the food isn't far behind. Try some standouts like the candied bacon pizza, chicken fried duck and the potato pancake chicken salad sandwich.

Differentiating itself from both the rough and ready garage-style brewhouse and the cavernous factory-size production facility, Bookhouse is delightfully cozy, with fine carpentry softening exposed brick walls, tile floors and tin ceilings. Bookshelves line the walls, lending a snug reading room vibe to the 100-seat space.

This Avon brewery has grown from a relatively small operation to one with close to 20 beers on tap. The Verde Gold ale, infused with Hatch Valley New Mexican Green Chilies, the barrel-aged Black Widow imperial IPA, and the Blueberry Beauregarde are some of our favorites.