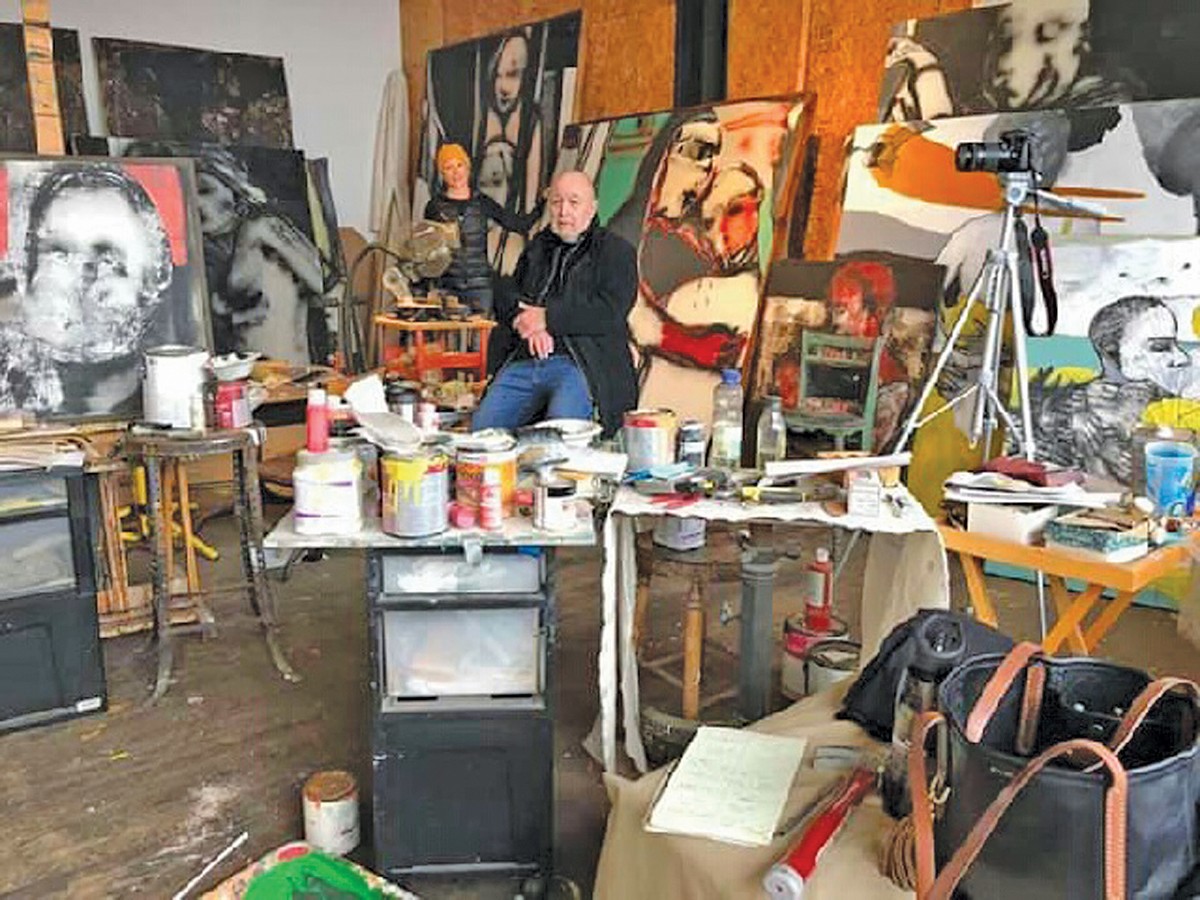 Falling from the Sky of Now, the latest solo exhibition by Douglas Max Utter at HEDGE, is not a retrospective, although it seems like one. The gallery is jam packed with work spanning decades. And what can we possibly say about Douglas Max Utter's work that hasn't already been said? For one thing, excavating work from an artist's long career has to be one of the most exciting aspects of putting on a grand-scale exhibition such as this one. As we explored the paintings and monoprints on hand, HEDGE's owner, Hilary Gent, shared with us her dive into the artist's studio in preparation for this huge undertaking.

"I found these works on paper in his (Doug's) studio attic," she said. "I thought they were fascinating because they felt like studies for larger paintings. I know he told me he laid out large sheets of paper when he was working from home in the late '80s and using found materials, like house-paint spray paint, and seeing how those materials work."

Whether he knows it or not, Utter's use of unconventional materials helps him remain a catalyst for many young artists looking to push the envelope with drawing and paintings.

"It's really a revelation for art students, because you feel like you need to be blocked into certain materials," Gent said. "A lot of these older works don't have a photo reference, which I think is important. Doug's study of the human figure came from looking at portraiture, looking at other people, looking at paintings by masters that influenced him. Much of the newer work has a photo reference or at least an advertisement from a magazine that he translated into something more abstract."

In "Ratman," for example, Utter uses spray paint and latex. The framing is simple. You can see the roughened-up sides of the paper, the life of the support that carries the artist's ideas. Here we see his signature color blocking. It's very punk rock, and it is huge.

A grouping of five bird's-eye-view landscapes combines acrylic, pastel and shellac; the shellac looks like geometric clouds passing over and deepening the stoplight colors (red, yellow, green) below.

In fact, yellow, a color that arguably symbolizes both illness and optimism, seems to dominate the two rooms and Utter employs it with genius. In "Yellow Sadness," latex spray paint and chalk has been applied with a spackling knife, adding physical layers to the psychological strata of the work. "Motherhood #1," a portrait of his ex-wife and his child, hangs on the next wall, just a few feet forward from the cubby where "Yellow Sadness" is displayed in perfect syncopation.

Small portraits are riddled with primary colors amidst gray scale memories. Reclining figures are created with pastel, latex and tar. All have a tactility that pulls us closer to the subjects. One of our favorite pieces, perhaps, is a self-portrait of the artist when he was young. The awkwardness of it is so elevated. His pronounced ears look like the open doors of a taxicab, ready to listen in and observe in order to create later on. It's a smaller scale work, but the impact is big.

Then we found ourselves before "Wisconsin Car Crash," a painting about the death of his grandfather, who had died in a car crash caused by a drunk driver. "His father never explained the story to him," said Gent. "He found out about it later on after his father passed away. His mother went through a very long grieving period. When he started learning about this family history and his grandfather, a lot of that grief and chronology started coming out into Doug's work."

This masterwork is riddled with symbolism and translation. On the right side of the canvas are, presumably, the artist's grandfather and his dog, which also perished in the accident. They are ghostlike figures rendered in chalk against a black background. Chalk is an ephemeral medium, which deepens the meaning of this piece. A pack of wolves symbolize, perhaps, the death of the family pack or the looming dangers in life. In the upper-left background, here's a house with a widow's walk, certainly signaling his mother's grieving period. In the sky there is a low pressure system represented by a spiral, connoting the depression that sets in after death. Added Gent, "This painting was on display at (Bill) Busta's gallery, and like all artists, Doug sees the work and wonders if he needs to fix it, by adding or subtracting imagery." Perhaps it is an attempt fix history.

We leave you with a statement from the artist himself, which only amplifies why you need to go see this exhibition.

"Our lives are measured by our bodies, by our experiences, by our shadows. Paintings are another measurement that some people make, by pushing materials around, however delicately or sloppily. Whatever the subject of my work, I'm also showing my hands and my hips and my shoulders clothed with the limits of my years, and my care or the loneliness I feel, as I push and move against and into the shift of things. I look for myself everywhere."