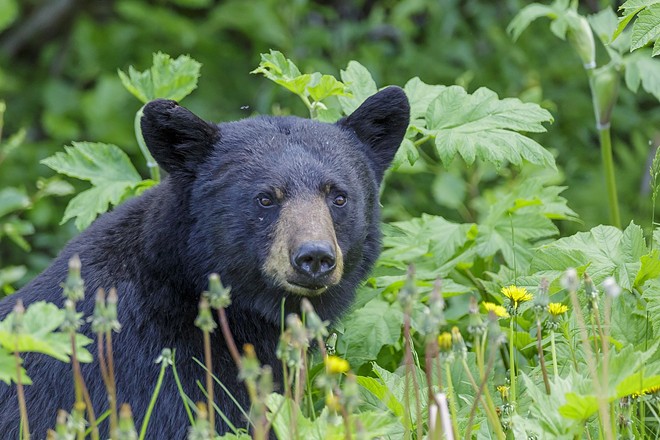 Photo via Wikimedia Commons
While Northeast Ohioans may be used to deer wandering into their backyards, it's a whole 'nother thing to see a black bear.

In the past few weeks, three black bear sightings have been reported in Northeast Ohio. Instances in Mantua Township and Chagrin Falls were caught on camera, while an Aurora woman called the Ohio Department of Natural Resources (ODNR) after her kids reported seeing one in their backyard.

Thankfully, Jamey Emmert of the ODNR wildlife division affirmed that there's no need to lose your shirt over a black bear sighting — the creatures are relatively harmless.

“Really, we refer to them as overgrown raccoons and they behave very similarly and they don't seem to know how big they are," Emmert told Fox 8. "So most of the time if someone encounters a black bear, clapping your hands, waving your hands above your head, shouting at them, that will discourage them from coming forward."

Able to travel at speeds of up to 35 mph, climb trees and swim long distances, black bears are "extremely agile" creatures. This, along with the fact that Aurora is about halfway between Mantua and the Geauga County line, has prompted wildlife experts to believe that the three sightings were actually the same bear.

According to ODNR, there are around 50-100 black bears living in Ohio, and the population is growing. The organization said there might be more sightings this summer than usual because of this increasing population.

When hibernation ends in early May, many of these bears — often young males — come to Ohio from as far as Pennsylvania or New York in search of resources or a new habitat. Often, these bears travel back to their original locations following the end of summer.

So what can you do if one of these furry friends stumbles into your neck of the woods? The most important thing to remember is to remain calm. They are fearful of people, and in most cases will flee as soon as they are aware of your presence. In the unlikely event that the bear sticks around, be sure avoid eye contact and retreat slowly — so, basically how you treat dinner with the in-laws — giving the animal a clear escape route. (Avoid running and climbing trees at all costs, as this may lead to a chase.)

Residents can also bear-proof their yards by removing outside food, such as bird feeders, trash cans, pet food, grill-grease or crops.

If you see a bear, be sure to report it by contacting your local county wildlife officer or regional District Wildlife Office. You can also submit a report online through the Wildlife Species Sighting Report.

Sign up ​for Scene's weekly newsletters to get the latest on Cleveland news, things to do and places to eat delivered right to your inbox.
© 2022 Cleveland Scene