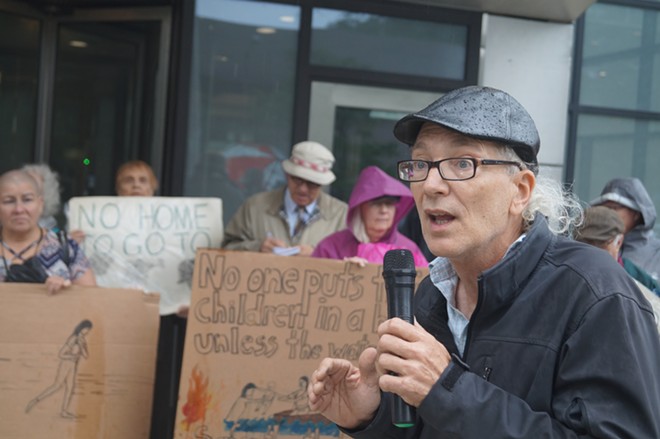 A local family from the African nation of Mauritania was scheduled to speak Thursday afternoon at a rally in downtown Cleveland in honor of World Refugee Day. The plan was that they'd share their story of fleeing violence and persecution in their home country and of how they came to settle in Northeast Ohio.

But according to Lynn Tramonte, of the Ohio Immigrant Alliance, one of the rally's organizers, the family chose not to come at the last minute.

"They had many polite reasons," she said, as rain poured down outside the Federal Building on E. 9th Street. "But I know the real reason was fear. I was going to speak today about the moral failings of U.S. leadership, about how we've cut the number of refugees we'll accept [in the U.S.] by 75 percent, but instead I'd like to give a message to refugees who may be listening: We love you, we are glad you are here, and welcome home."

The Mauritanians, like other refugees and immigrants in Ohio and across the United States, have reason to be wary.

President Donald Trump, alongside his militarized gestapo, the U.S. Immigration and Customs Enforcement (ICE), have been rounding up and deporting immigrants en masse since 2017. On Monday, Trump said that ICE would deport "millions" of illegal immigrants in the coming days, raids which are reported to begin in 10 major U.S. cities on Sunday.

At the U.S. border, those fleeing violence in their home countries in Central and South America — and in Africa, now in record numbers — are being detained in dictionary-defined concentration camps: that is, the "indefinite detention without trial of thousands of civilians in inhumane conditions — under armed guard and without adequate provisions or medical care."
In Cleveland Thursday, Tramonte was joined by about 20 others from the Greater Cleveland Immigrant Support Network, Friends of Immigrants Lake County and other groups who braved the weather to send a message of support to refugees and one of opposition to the U.S. government.

Individual speakers called for an end to policies like the Muslim ban, family separation at the U.S. border and the disregard for internationally recognized conventions for asylum seekers.

Rita Danks, an eight-year volunteer with the Samaritans of Green Valley, which works along the Arizona-Mexico border, said she spoke on behalf of the "literally thousands" of migrants from El Salvador, Honduras, Guatemala, and elsewhere who are fleeing unspeakable violence.

"We are seeing an increase in indigenous people, who speak neither Spanish nor English," Danks said, "and also an increase in the number of babies, toddlers and family units."

Rally organizer Don Bryant called on the U.S. government to abide by international conventions, and said that the 71 million refugees who are currently fleeing across the world are doing so in many cases because of U.S. military and economic policies abroad, including wars in the Middle East, natural resource exploitation, and trade policies favorable to U.S. transnational corporations.

"Let's be more humane in all our policies," Bryant said. "We must disallow this to continue. We have to treat these people how we would want to be treated."

While a planned March was postponed due to the rain, the small group kept up a chant as employees trickled out of the Federal building: Say it strong, say it clear. Refugees are welcome here.
© 2022 Cleveland Scene