One Clevelander Spreads Kindness Across the Country, With the Help of a Bus, a Dog and a Bunch of Signs

Alexandra Sobczak
Bob Votruba and his dog, Bogart, stand in front of the Kindness Bus.
The Kindness Tour Bus is hard to miss. Wishes for peace, happiness and kindness cover nearly every inch of its blue exterior, interspersed with hearts, flowers and birds.

Bob Votruba, a 64-year-old former cabinet maker and Cleveland native, is the man behind the wheel and the One Million Acts of Kindness crusade. But often, he can be found on a street corner right outside his parked vehicle. Most recently, he's stopped in Cleveland. 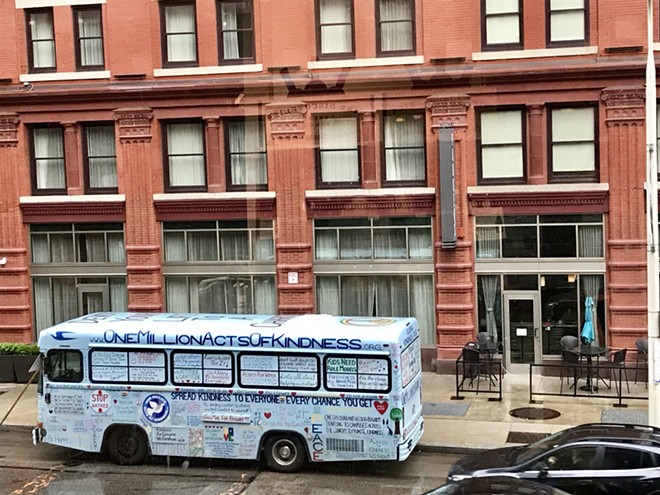 Alexandra Sobczak
Just two weeks ago, Votruba is standing with a sign at the intersection of East 9th Street and Euclid Avenue, waving at every person who looks in his direction.

“It’s amazing, the interaction you have,” Votruba tells Scene. “It just fills my heart … when people are pleased with seeing the word ‘kindness.’”

Within a 30-minute span, Votruba interacts with a multitude of passersby. A man fist-bumps him. A woman brings him a water bottle. A woman in a car takes a picture of him then blows him a kiss. Various women stop to pet Votruba's dog, Bogart. One of them hugs Votruba, and he says, “Go help someone.”

Votruba’s “Kindness Tour” includes his bus, his own two feet and his bike, which has a host of signs attached. He’s rarely nervous talking to strangers, and he tries to talk to everyone, especially if it looks like they’re having a bad day. His biggest obstacle while approaching potentially unhappy strangers is actually ear buds, he says. But he still tries to make those people smile.

"Every one of these people that walked by – young, old, professional, homeless, male, female, this faith, that faith, Democrat, Republican – they all want kindness in their lives,” he says.

While in Cleveland, he’s out and about every day, either on the streets downtown or speaking to groups in the suburbs. He used to spend “all day, every day” outside talking to people, but now he splits his day up between the Kindness Tour and his current writing projects, a children’s television program and a poetry book series titled Eight Lines of Love. He feels a bit guilty about splitting up his day, but he’s also excited about his new projects.

Votruba has taken the Kindness Tour to all 48 contiguous states, visiting campuses, schools, churches, city streets and more. The tour first began when Votruba visited Virginia Tech three days after the shooting occurred on its campus in 2007, engaging with anyone in the community who wanted to talk.

All three of his children were college-age at that time, and he felt he had to take action. He was divorced by that point, and he got rid of his car, furniture and most of his clothing to follow this passion. Everything he owned was on his bus, effectively taking away his "safety net" so that he had "nothing to come back to."

The tour has continued on since, based on the idea that it’s possible to spread kindness through actions, words and thoughts, Votruba says. Actions can be as simple as a smile or a greeting or as complex as offering a service to someone or working with a charity.

“You don’t know what anybody’s going through,” Votruba says. “Maybe the one or two words, or the smile you show that person, is the only positivity they’re going to have during the course of today … It really does make a difference.”

Sometimes his conversations are short and light, and sometimes they cover serious topics. He prioritizes people who are hurting over his own time.

“The beauty of what I do is there's a certain amount of anonymity to it,” he says. “If somebody's really having a tough time … they don't want to share it with their friends, brothers and sisters … But a guy pulls into their town with the bus, and I'll start these conversations with people.

“Some of them last two or three hours. [There are] kids even cutting [themselves] or people have attempted to take their life or people are thinking of taking their life. I'm talking to these people every day, and I'm going out of my way to find them and help. I'll work in the pouring rain.”

But he doesn’t get paid for the Kindness Tour, aside from selling his writing projects. He volunteers his time to talk to people. He begins by telling them he doesn’t have training in psychology, but he will still listen and care about them.

“After those talks, I am so drained,” Votruba says. “It's like a transfer of everything good I have inside to that person. I go back to the bus sometimes and I just cry … Then I start thinking about big things. Well, maybe this will help this person.”

Votruba recalls a time when a 22-year-old woman told him that the day before, she was on her way home to take her life, but then she stopped to see his bus. He says she saw the panel on his bus that reads “Someone needs you. Don’t end your life.”

“I've had so many people read that, and it just made such an impact,” he says. “This girl says ‘I saw it, and I cried so hard.’”

Votruba also believes in the power of kind thoughts, incorporating his faith into the Kindness Tour. He doesn’t discuss it unless asked, but he has “deep Christian beliefs” and often prays for the people he sees while on tour.

The Kindness Tour has already lasted longer than its original 10-year lifespan, and Votruba plans to keep on going, bringing the tour to Dayton this fall. He says there's only one thing that would make him end this adventure.

Alexandra Sobczak
Sign up ​for Scene's weekly newsletters to get the latest on Cleveland news, things to do and places to eat delivered right to your inbox.
© 2022 Cleveland Scene