Plane Skids Off Runway At Cleveland Hopkins; No Injuries Reported 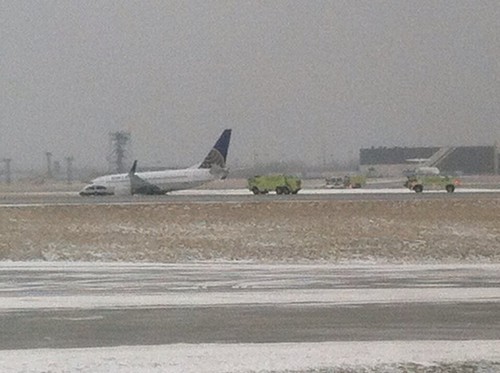 Gary Garnet of the National Weather Service tweeted a photo of a plane that skidded off the runway at Cleveland Hopkins International Airport this morning. United Airlines Flight 1639, a Boeing 737, was taxiing into the airport after touching down in Cleveland.

"While turning on to the taxiway, the aircraft slid into the grass and snow. There were no reported injuries among the 103 passengers and five crew members. United is working to get the customers off the aircraft and to the terminal," United spokeswoman Jennifer Dohm says.

Road conditions throughout Northeast Ohio have been extremely icy all day, which may have contributed to the accident. According to Garnet, "they are moving a portable stair case to unload whatever passengers are on the plane." No injuries have been reported.

Cue any and all "Welcome to Cleveland!" jokes. (Please don't.)