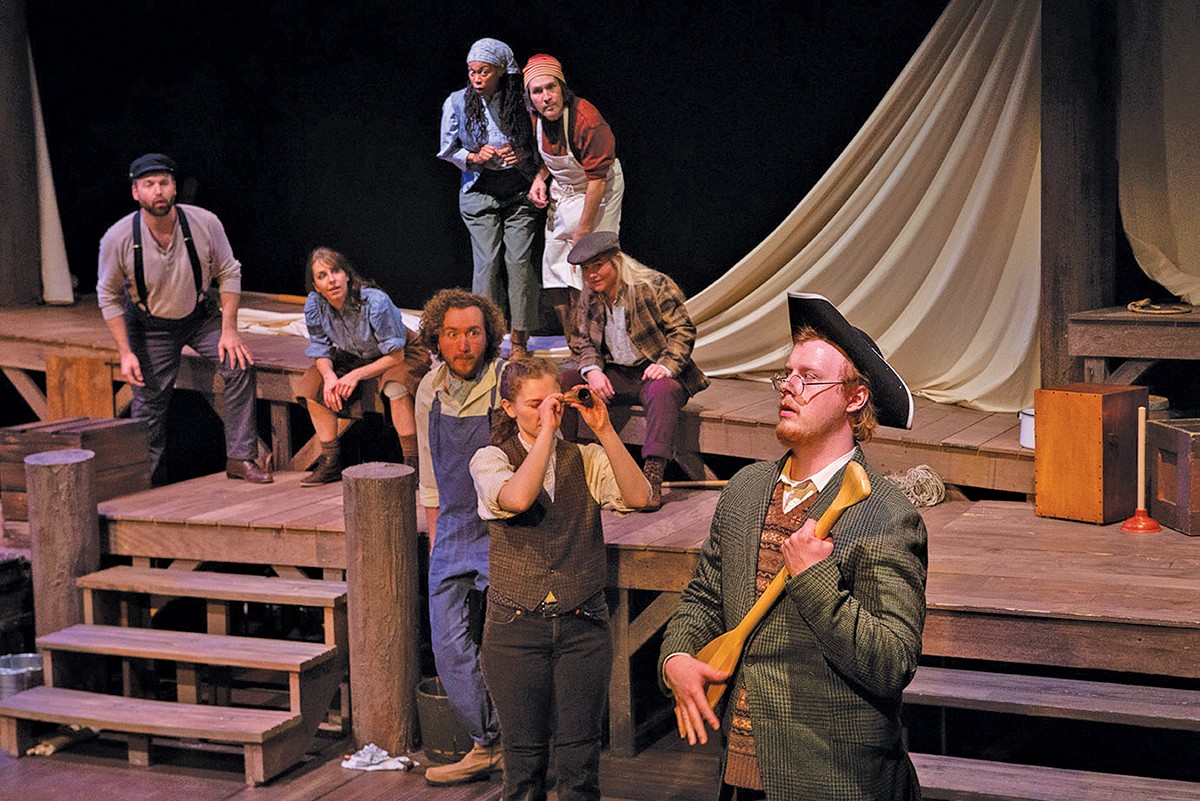 Photo by Steven Wagner Photography
Storytelling done right, in Dobama’s production of "The Old Man and the Old Moon."

Like magicians, many theater creatives have mastered the art of illusion. You'll see productions where clever trickery with light, special effects and design create near-impossible imagery that makes you wonder, "How the hell did they do that?"

This isn't a question you'll be asking yourself after attending Dobama Theatre's production of The Old Man and The Old Moon, a show that exchanges pageantry for more traditional storytelling. In this play-with-music, Dobama's talented cast relies on homemade special effects and the power of imagination to tell a heart-warming folk tale, the result of which is a delightful, downright enjoyable night of theater.

Did you ever wonder why the moon waxes and wanes? PigPen Theatre Co., a group of young Carnegie Mellon graduates, answers this question in The Old Man and The Old Moon, which they premiered off-Broadway in 2014.

You see, in this show, we learn that the moon is actually made of liquid light, but it has a leak. Each night, the titular Old Man (Gabe Reed) climbs up a ladder and refills the moon. But when the Old Man's wife (Emmy Brett) is called by a distant memory to journey west, the Old Man requisitions a group of sailors (Kieran Minor, Treva Offutt, Tim Keo, Jourdan Lewanda, Josh Innerst and Amy Bransky) to chase after her, abandoning the moon and casting the world into disarray.

Under the direction of Melissa T. Crum and Nathan Motta, Dobama's regional premiere of The Old Man and The Old Moon is unapologetically energetic and impassioned. The eight-person cast is undeniably talented, with almost every one of the actors playing multiple characters and various instruments, ranging from guitars to piano and even an accordion, on stage.

The cast embraces the Gaelic sound of PigPen's original songs they crafted for this story, all the while using sheets, flashlights, mops, and other props to tell a tale that spans across oceans. The most beautiful effects are created using puppetry, such as when intricate shadow puppetry depicts how the Old Man's ship traversed dangerous coral reefs and flying sharks. Another such example of beautiful imagery is when the cast uses their flashlights to show the moon dripping liquid light.

Of course, Marcus Dana's lighting and Ben Needham's scenic design also help to create the illusion of time and space. The lighting is fantastical and features vintage Edison bulbs. Dana's design for the storm sequences is especially transformative. While individual place-settings, like the ship's deck, the Old Man's home and the basket of a hot air balloon, are depicted using props and imagination, Needham's foundation for the set consists of multi-leveled platforms built to resemble a ship's dock.

Most of Dobama's creative elements appear to be an homage to the designs used in PigPen's original production, save for Angelina Herin's costume design. Herin's costuming, which features overalls, patterned sweaters and corduroy pants, is somewhat more eclectic, and wonderfully so given the nature of the show.

Less successful is the show's sword fighting scene choreographed by Ryan Zarecki. The battle fought with rolling pins, plungers, and other silly items is cute at first but overstays its welcome. The actions are far too cartoonish and the grunts of exertion from the cast quickly become frustratingly repetitive.

The only actor not portraying multiple characters is Reed, but he certainly has his hands full playing the titular character. Reed makes for a pleasant-to-watch protagonist whose dedication to the moon and love for his wife is heartwarming.

While the Old Man is the star of our story, we're introduced to plenty of other interesting characters during the (somewhat taxing) 100-minute show. Lewanda acts as a partial narrator and the stoic sailor, Matheson. Her respectable character off-sets the thick-accented, more eccentric — but by all means just as enjoyable — sailors Cookie and Mabelu, played by Keo and Offutt, respectively.

And in one of the most notable scenes, we meet the famed naval lieutenant Pericles Llewellyn McWallander in the belly of a giant fish. Innerst is jovial in his role as Pericles, a character who fully accepts his fishy fate, making this one of the funniest, most endearing moments of the show.

Every one of the actors on stage is undeniably skilled, both musically and theatrically. With their energies radiating as bright as their flashlights, it's obvious to see that each player is passionate about the story they're telling.

Perhaps that is why — despite telling a fantastical tale with giant fish, flying sharks, and liquid light — Dobama's production feels down-to-earth and intimate. The cast and creatives have embraced the whimsy, wonder, and creative storytelling characteristics of The Old Man and The Old Moon, crafting a memorable experience. You won't look at the moon the same again.