The Blunt Truth: This Week In Pot Busts and Drug Czars 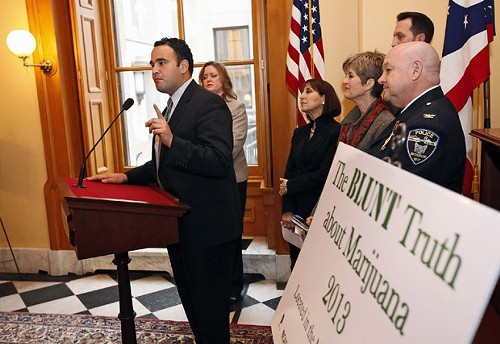 Last night police officers in Alliance busted “the largest indoor marijuana growing operation in Alliance Police Department history,” which isn’t exactly saying a lot, since their last big bust was some 20-year-old college student with a couple of scales in his dorm room (the student’s trafficking count was escalated to a felony because it took place—horrors!—on college property, a sinister and rare aberration in the history of drug-dealing hubs).

Alliance resident Robert Baumgartner, 41, was charged with illegal cultivation, trafficking and possession after the Alliance Police Special Investigations Unit served a search warrant and found 260 marijuana plants, some “as large as six feet high,” an “elaborate” lighting and ventilation system, proceeds from weed sales, and packaging and shipping materials. If it's any consolation, Baumgartner also won the Scene's Best Of Cleveland Award for "Most Adorably Benign Mugshot That Kind of Makes Suspect Look Like Kevin Smith Minus Showers."

In today's press conference, Sabet seemed most concerned about people using “smoked marijuana under the pretense of medicine" and medical marijuana legalization advocates “putting on white coats and pretending to have compassion for the sick and dying."

Sabet just launched a hilariously backwards anti-legalization group called Project SAM, or Smart Approaches to Marijuana, which seeks to prevent a chimerical being he dubs the "Big Marijuana establishment" from marketing weed to children, among other hallucinatory non-issues.

In case you were wondering, Sabet is not a grandpa from the 1950s. He's 34 and went to UC Berkeley, where he cried himself to sleep every night because his classmates wouldn't stop "using smoked marijuana." And that's how drug czars are born, kids.