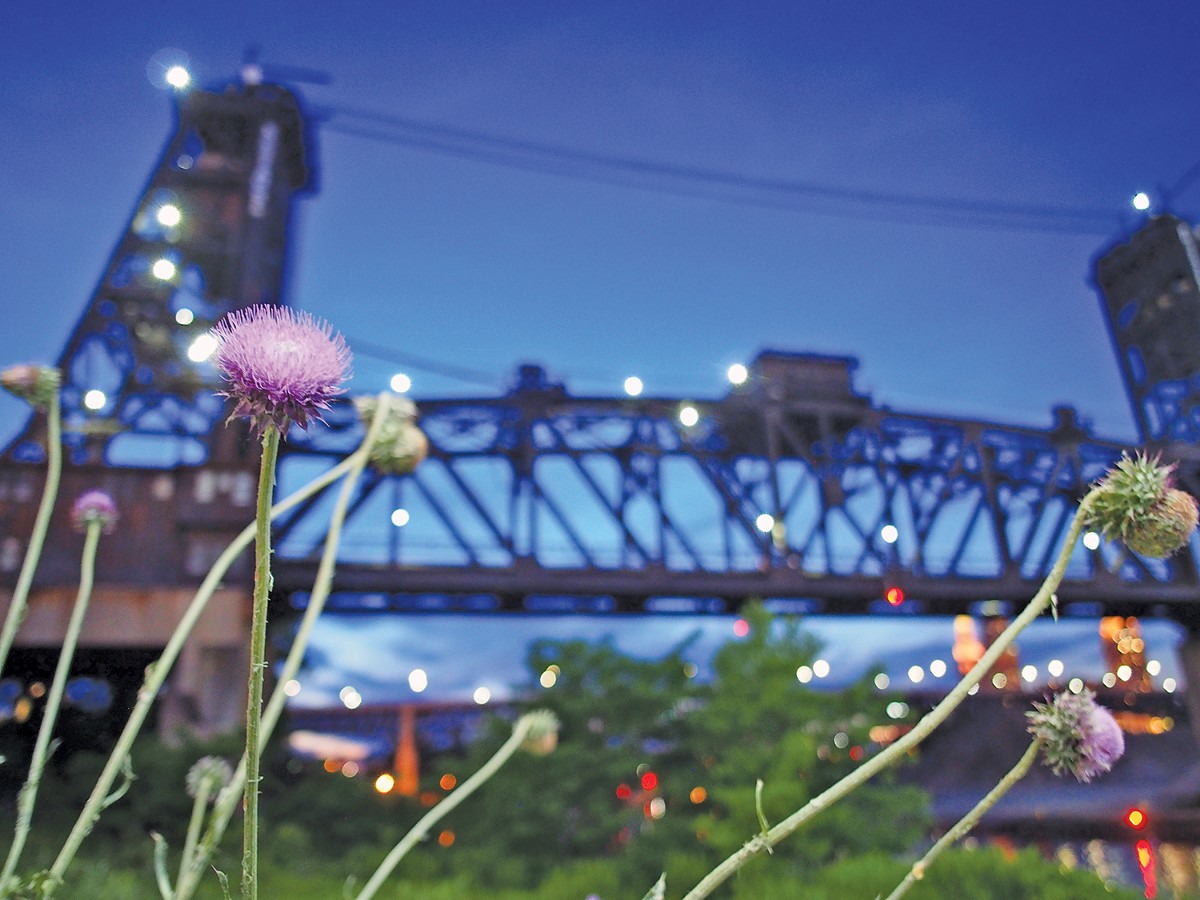 In photographer Michael Loderstedt's view, painting is not the only art medium where the Bob Ross-coined term "happy accidents" applies.

"People don't realize there are a lot of happy accidents in photography," Loderstedt says. "We get a lot of gifts from just doing it and thinking about different ways to photograph. You can get some pretty interesting results by just coincidence."

And, by happy accident, the retired Kent State University photography professor got the opportunity to open PhotoCentric, a commercial photography gallery in the Waterloo Arts District of North Collinwood, earlier this month. The former Gold Building space at the corner of East 156th Street and Waterloo Road, which had been unoccupied for 20 years and was saved from demolition, took six months to whip into shape with reinforced walls, perfect lighting tracks and a gleaming new bathroom.

Last week, Loderstedt was showing off the bright white gallery, which takes up only a sliver of the century-old building. He explains that this is the only commercial photography gallery in Cleveland proper. When people think of art, he says, they probably think of paintings first; but as photography has been around for 150-plus years, it's time the art form got equal recognition. He says that opening up a new art gallery of any kind in the area shouldn't be an anomaly.

"I think we need three times as many art galleries here. We don't have a collector base, and the way you establish that is by having art galleries," Loderstedt says. "And when you have so few, there's not really enough synergy to bring people to the city to look and talk and think about art, so we need a lot more of them."

Unfortunately, there aren't a lot of people willing to open up a new gallery, Loderstedt says, as it's too much of a financial risk. The 62-year-old never saw himself running his own photography gallery in retirement either. "But I'm excited about this for a whole lot of reasons," he says. "It's necessary, we need to build a community around artists and I think it's going to be a good thing."

"I put this together on the fly as I was working so hard to get the space ready," he admits. "Our upcoming exhibitions will be more curated and thematic. For this one, I just asked the people I knew who were still practicing to respond to the prompt 'hopeful,' because it's a kind of a hopeful venture to open a commercial gallery and we're also hopeful about what photography can do for society."

While all of the photographers put their own spin on the theme, about half of the works depict flowers and trees. As Loderstedt points out, the notion of plants and growth and regeneration is extremely hopeful.

To combat the cost of running a professional gallery, Loderstedt plans to offer other services like framing and camera rentals along with various educational events and opening-night parties. The goal, of course, is to get more people in this city to think seriously about supporting local artists by buying art and putting it on their walls.

"It doesn't cost much," he says. "Photography and works on paper or prints are generally much cheaper than paintings. You can buy a photograph in this place right now for $100, which is really not that much. These are original works made by people you can meet. It's supporting real people. Real artists do need real money to do their work. They have kids and houses and utilities bills like the rest of the world, so they need support. And that's what you can do at a commercial gallery.

"I don't know what the actual percentages are, but I bet you it's only 20 percent of Cleveland houses that have original art, and that's something to me that makes life enjoyable," he says. "You can come to that photograph again and again and experience things about it and feel connected to a community. A person made that."

At the gallery's opening night, part of the monthly Walk All Over Waterloo event, Loderstedt says hundreds of people came through the new space and he even sold a couple of pieces of art. But there is still much to be done, including sprucing up the basement and an office space and putting together a robust website. Loderstedt, who lives in the neighborhood, says he plans to continue diversifying the gallery's programming. That means not just a diverse set of producers but also the type of photographic style, like video, projected works and photographs on 3-D objects.

He's entirely hopeful that the more people learn about art photography — and not just what they garner from Instagram — the more they'll want to be a part of that world.

"A photograph shows us so much detail. It brings up issues of environment and social issues and, I think, things people want to know about," he says. "A photograph is made from a machine, a camera, so it has the unique ability to capture that content. Whereas with other art forms, it's much more subjective. You're always making something of an abstraction."