Rewind: 46 Years Ago On This Date in Cleveland 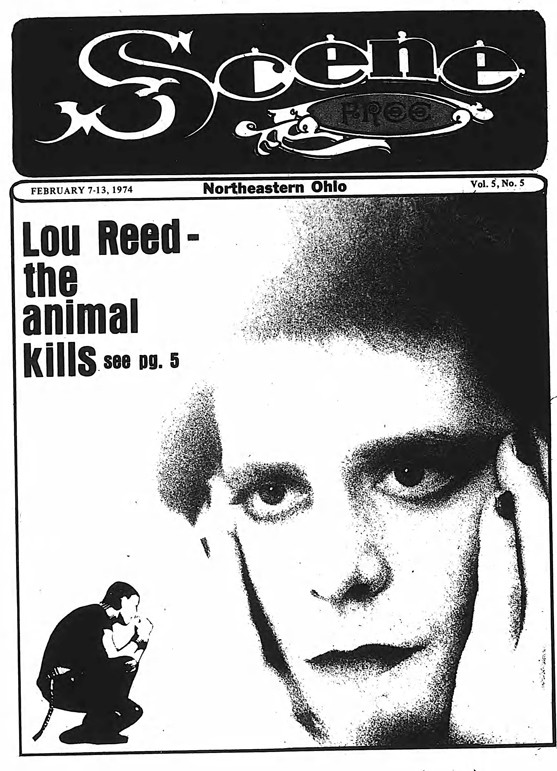 This review of Lou Reed's 1974 album Rock 'n' Roll Animal by Crocus Behemoth, the pseudonym that local musician David Thomas used when he wrote for the paper, ran in the Scene issue dated Feb. 7, 1974, with the headline "Lou Reed's ANIMAL Kills!" and the subhead "Live recording of Reed's new band is an 'r&r orgasm.'"

Lou Reed introduced his new band to the Midwest in November at the Akron Civic Theatre two guitarists, keyboardsman and rhythm section. He had them dressed in matching black outfits — leather pants, silver belts, body shirts. A death squad out of some cheapo sci-fi movie. He also wore black — leather pants and jacket and a silver chain hanging from his waist. Chic street punk.

The band was cooking for the first time on what was then a young tour and Reed was obviously happy about it as he jerked awkwardly around stage, guitar-less, occasionally knocking into mike stands and tripping over cables. Yeah, clumsy, but he was happy. During one extended instrumental he wandered over to a monitor and leaned his head into its speaker, merrily keeping time by beating his thigh with the chain. A picture of rock and roll bliss.

Reed and his band stunned the near sell-out crowd in Akron. It's hard to say what the audience had expected. Maybe another anemic, warmed-over version of The Velvet Underground, the kind of thing served up by Reed's previous band, The Tots. Maybe a wimpo "Walk On the Wild Side" pop poop show. Maybe whatever. They certainly didn't expect the obvious. Reed walked on stage with his band and unleashed a rock and roll overkill.

At a similar concert in New York City a month or so later, Reed and his band were recorded and the result is ROCK N' ROLL ANIMAL. A 40-minute sustained rock and roll orgasm. The ultimate rock and roll concert recording. The most important rock and roll album of the 70's. On and on. Make up anything. It'll be true.

ROCK N' ROLL ANIMAL is, as critics like to say, a momentous album. First off, it's the most intense rock and roll album released in this young decade. If the damn thing doesn't make the adrenalin in your body churn your innards to mush, you're dead people. Secondly, it's the most accessible album Reed has ever recorded and if future releases maintain some of this quality Reed is finally gonna make it as a Big Star.

A lot of credit has got to go to Reed's new band. For the first time in his career he's got himself a real-live, cooking rock and roll band. They're good, real good. Especially guitarist Steve Hunter. In Akron they put on the best rock show I've seen in three years. For all The Underground's rawness and intensity, these new guys make 'em sound like wimps. Even the technical aspects of the album are exceptional. The sound quality of the instrumental tracks is so clean it's hard to believe ROCK N' ROLL ANIMAL is a live recording. It actually sounds better than a number of studio albums I've heard. Only the vocal tracks, for some reason, are weak, though that may have something to do with Reed's habit of ignoring the mike.

Four of the five songs on ROCK N' ROLL ANIMAL are old Underground material, almost the Very Best of The Underground — "Sweet Jane," "Heroin," "White Light/White Heat" and "Rock And Roll." The way they're performed here, however, they sound sparkling new. The Underground's primal dynamics have been super-charged by a strong dose of rock and roll. It's like a mad dog let loose. The dynamics have been so hyped up that listening to the thing is practically an electric sex fantasy.

A pretty and seductive intro opens Side 1. It's really an extension of the intro that precedes the original recorded version of "Sweet Jane." Hunter's guitar emerges from a double guitar riff and flows through an enticing and teasing lead that magically segues into the piledriver chords of "Sweet Jane."

"Heroin" follows. Thirteen minutes of a maddening tease that finally releases you to a frenzied rock and roll orgasm. Four times the tempo and intensity build to the point of no return, the tension becomes unbearable and you only want the band to break loose and four times the bastard denies you, cuts it off, returns to a slow, quiet melody. Each time a higher plateau of anticipation is hit and a higher threshold established until, finally, when you just can't stand it anymore, the band gives it to you full in the belly — a shuddering, bestial come of squelching guitars and a frenzied beyond-control beat.

The raw "White Light/White Heat" opens Side 2 with another bombardment. In concert, glaringly white lights blast across stage, part of the very effective light show designed for Reed by the people who do David Bowie's lighting.

"Lady Day," a haunting song from the BERLIN album, brings down the energy to a saner level, which is a relief. It's only a brief breather, however. The anthem "Rock and Roll" follows to end the album on a high level. Some fluid and powerful guitar leads motivate the track and a funky guitar break starts out calm and builds relentlessly as bass and drums emerge and all burst into a final mad climax.

ROCK N' ROLL ANIMAL isn't a nice album. It doesn't do pretty things for you. It kills. Turn up the volume all the way — it turns you into a beetle scuttling across the floor.