'Anastasia' is Soft and Pretty and a Bit Too Twee 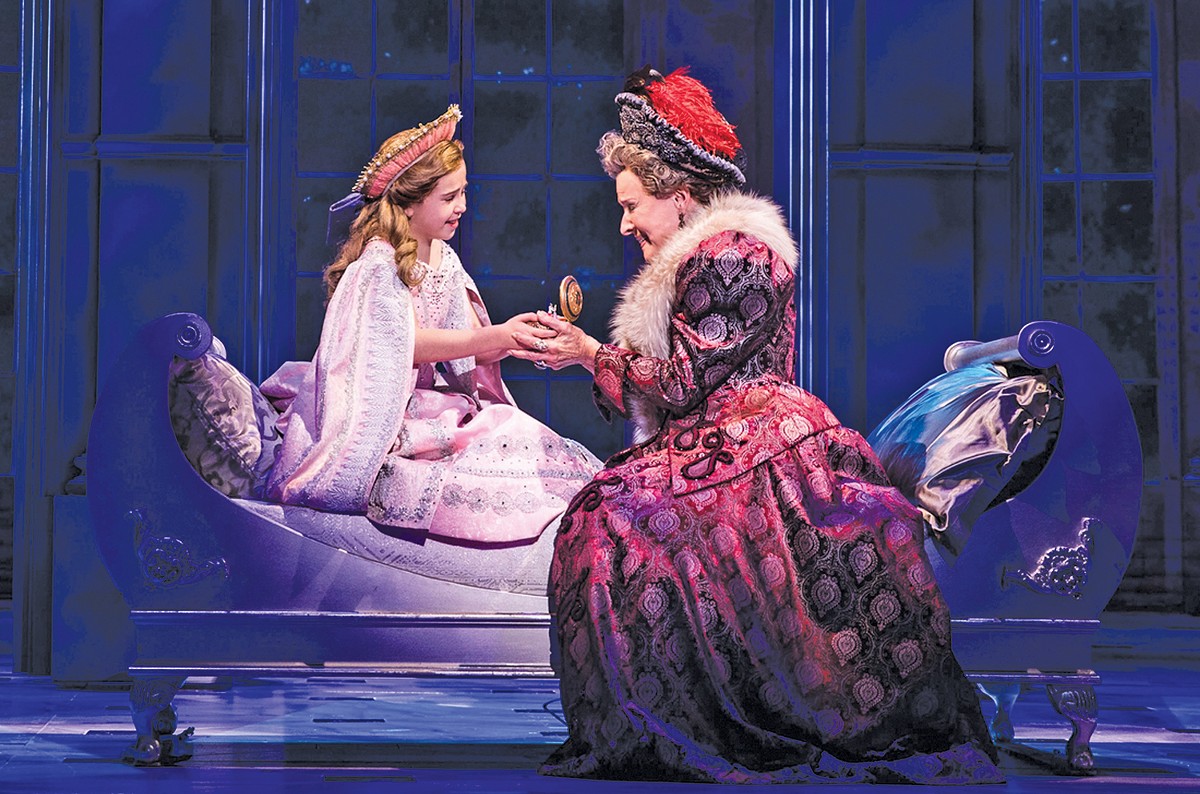 At the time, no one who heard about that mass murder stopped and said, "Hey, let's do a musical about it!" But in the ensuing years, it was rumored that one of the tsar's daughters, 18-year-old Grand Duchess Anastasia, somehow escaped the carnage and lived to tell the tale.

That quickly became an oft-told fantasy, surfacing in the 1956 flick starring Ingrid Bergman as Anastasia, followed by the 1997 animated film with Meg Ryan voicing the title role.

And here it comes again, this time as a Broadway touring production at the Connor Palace Theater at Playhouse Square. In the prologue, we see the 7-year-old Anastasia being doted over by her grandma, the dowager empress, and other members of the royal household. But their peaceful reverie is about to end.

In this play, the royalty on stage is matched by theatrical aristocracy among the creators, as the renowned Terrence McNally wrote the book and the fine composing team of Stephen Flaherty and Lynn Ahrens handled the music and lyrics. All three combined to fashion the wonderfully expressive 1997 musical Ragtime.

But even with all that talent the result in this case is surprisingly underwhelming, due to a story that feels meandering when it should be propulsive and songs that are rarely more than mildly pleasant. In short, this tale of a gruesome assassination followed by the grand duchess's race to freedom as she battles to reclaim her identity makes Anesthesia, sorry, Anastasia a borderline comatose exercise.

There are more than 25 songs in this corpulent offering, but none that emit the enticing aroma of a well-stuffed Russian pirozhki. By not placing the play's music authentically in the country of Anastasia's origin, it all seems like a costume party in Gates Mills with a Romanov theme.

This artificiality is also reflected in the characters who interact closely with the leading lady. We are quickly introduced to Dimitri and Vlad, con men who hear the scuttlebutt about Anastasia's supposed escape.

They quickly realize it's a crock and decide to monetize the situation by auditioning teenage girls to impersonate Anastasia. The goal is to fool the dowager empress and get her to fork over some rubles and rubies. That's when they find a street girl named Anya, the exact same age as Anastasia, who seems uniquely suited for the scam.

The thing is, these two con men are about as threatening as Harry and Marv, the dufus criminals in the Home Alone series. Dimitri, as played by Jake Levy, can be excused for not being a hardass since he's written cute and destined for better things with the "Duchess."

As Vlad, Edward Staudenmayer tries to be the endearingly goofy part of this duo, but he comes off as unfocused and largely unfunny. As occasionally happens in long-running shows, especially touring ones, an actor sometimes stops playing the moments and starts playing the reactions to the moments The thinking is: It's a humorous bit, I'll play it humorously. And that instantly kills the humor.

Staudenmayer does have one amusing interlude, when he puts the moves on Countess Lily and they end up in a limb-locked, face-crushing kiss. Based on the audible reaction from the audience, that wrestling move probably induced a fainting spell or two in the orchestra seats.

The real baddie in this show is the Bolshevik general Gleb, who is chasing Anastasia and serves as a replacement for the Rasputin character in the film. Channeling Inspector Javert from Les Miz, Jason Michael Evans scowls and sings with dread intent as Gleb, but we don't fear him as we did the monomaniacal Javert. And as it turns out, he has a heart of gold. Aw.

Indeed, all the conflicts in Anastasia are soft-focus. That extends to the high-tech projection backdrop that whisks the characters from an artful digital snowfall in St. Petersburg to a moving train to a view of Paris at night. Those images, meant to be transporting, actually seem like a cross between the gauzy, color-saturated postcards of the 1950s and the cloying paintings of Thomas Kinkade, replete with fuzzily glowing lights, lamps and moons. These pretty pictures are ultimately so achingly sweet they make you want to f'wo up.

That said, the cast features uniformly excellent voices. And if you swoon over costumes, the period finery crafted by costume designer Linda Cho is sumptuous indeed.

One constant bright spot is Lila Coogan in the title role. While her voice doesn't have the flowery highlights that some might prefer, Coogan's muscular vocalizations exhibit power and determination, necessary aspects of Anastasia's conjured existence. One wishes that some of that spirit could be reflected in the concluding scenes when Anastasia finally sees her dreams coming true.

Instead, the duchess goes all soft and marshmallow-y, like the show itself. This is a cream puff of a musical, ideal for tween girls and adults like them who are eager to be swept up in a princess fantasy. In Anastasia, director Darko Tresnjak and choreographer Peggy Hickey have baked a confection that will be swallowed happily. But there's little here for those who prefer their musicals with a dash of bite.