Rewind: 48 Years Ago On This Date T. Rex Made the Cover of Cleveland Scene 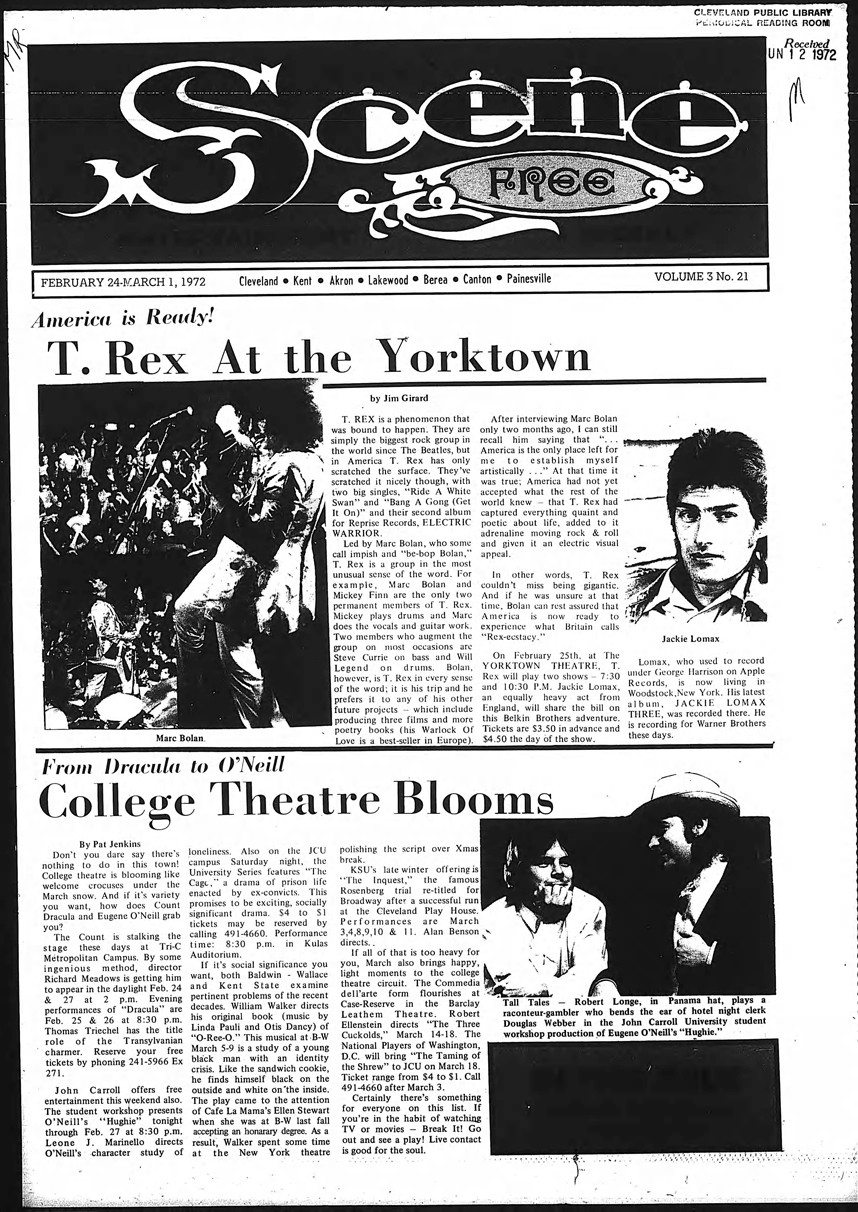 This story by Jim Girard about glam rockers T. Rex, who'll be inducted into the Rock Hall this year, appeared in the issue that came out in 1972. It featured the headline "America is Ready! T. Rex at the Yorktown."

T. Rex is a phenomenon that was bound to happen. They are simply the biggest rock group in the world since The Beatles, but in America T. Rex has only scratched the surface. They've scratched it nicely though, with two big singles, "Ride A White Swan" and "Bang A Gong (Get It On)" and their second album for Reprise Records, ELECTRIC WARRIOR.

Led by Marc Bolan, who some call impish and "be-bop Bolan," T. Rex is a group in the most unusual sense of the word. For example, Marc Bolan and Mickey Finn are the only two permanent members of T. Rex. Mickey plays drums and Marc does the vocals and guitar work. Two members who augment the group on most occasions are Steve Currie on bass and Will Legend on drums. Bolan, however, is T. Rex in every sense of the word; it is his trip and he prefers it to any of his other future projects — which include producing three films and more poetry books (his Warlock Of Love is a best-seller in Europe).

After interviewing Marc Bolan only two months ago, I can still recall him saying that ". . . America is the only place left for me to establish myself artistically . . ." At that time it was true; America had not yet accepted what the rest of the world knew — that T. Rex had captured everything quaint and poetic about life, added to it adrenaline moving rock & roll and given it an electric visual appeal. In other words, T. Rex couldn't miss being gigantic. And if he was unsure at that time, Bolan can rest assured that America is now ready to experience what Britain calls "Rex-ecstacy." On February 25th, at The YORKTOWN THEATRE, T. Rex will play two shows at 7:30 and 10:30 P.M. Jackie Lomax, an equally heavy act from England, will share the bill on this Belkin Brothers adventure. Tickets are $3.50 in advance and $4.50 the day of the show.

Lomax, who used to record under George Harrison on Apple Records, is now living in Woodstock, New York. His latest album, JACKIE LOMAX THREE, was recorded there. He is recording for Warner Brothers these days.