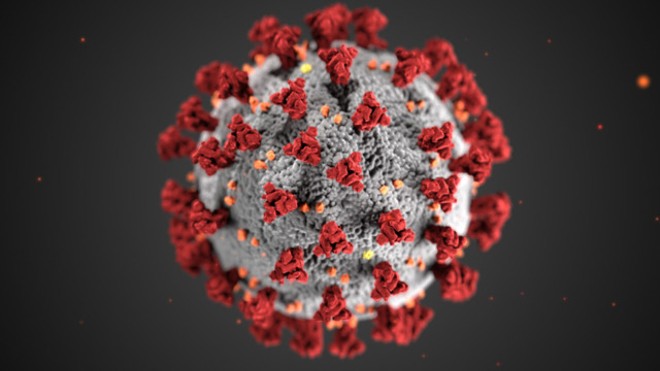 CDC
The most difficult thing about measures to contain the pandemic coronavirus that has swept across the globe and the United States are all the unknown factors about the disease and how exactly it spreads.

Several mass tests for the coronavirus among groups of people — including recent testing done in an Ohio prison — highlight one alarming dimension of that lack of knowledge.

In those tests, a large proportion of individuals — much higher than the Centers for Disease Control and Prevention's estimated 25 percent — tested positive for the virus without having any symptoms at all.

If the results of those tests are relevant to the general population, they suggest you could very well catch and spread the coronavirus that causes the sometimes-deadly respiratory illness COVID-19 without ever knowing it.

The virus causes serious symptoms in roughly 20 percent of the population, with an estimated 5 percent — mostly those who have underlying health conditions or who are above the age of 60 — needing intensive care.

Ohio, like the U.S. in general, is a long way from being able to administer mass testing across its population. Thus far, the state has relied on testing mostly a small group of people who have severe symptoms of the virus.

Even with that narrow testing criteria, Ohio has confirmed more than 11,600 cases of coronavirus. Those cases have led to at least 471 deaths in the state.

But state officials tested every inmate at the Marion Correctional Institution recently. What they discovered was alarming.

Some of the findings were likely specific to that prison, where COVID-19 has established a strong foothold already. Roughly 73 percent of the inmates at the facility — more than 1,800 prisoners — had the virus. But the alarming thing is that a large number show no symptoms at all.

In one shared dorm at the prison, all 152 inmates living there tested positive. But 60 — about 40 percent — didn't have any signs of the disease.

That's a larger pattern found in the mass testing the Ohio Department of Rehabilitation and Correction has done, officials say.

"Throughout our mass testing process, we have found many individuals who are testing positive for COVID who are asymptomatic,” ODRC spokesperson JoEllen Smith told The Columbus Dispatch yesterday.

Other mass-testing situations have yielded similar results. The U.S. Navy tested all 4,800 crew members of the USS Theodore Roosevelt earlier this month after COVID-19 broke out there. The outbreak was more contained than it is in Ohio's prisons — 600 sailors tested positive. But of those, 60 percent have shown no symptoms.

“It has revealed a new dynamic of this virus," Defense Secretary Mark Esper said on NBC's TODAY show Thursday. "That it can be carried by normal, healthy people who have no idea whatsoever that they are carrying it.”

Mass testing of 397 residents of a Boston shelter for those experiencing homelessness had similar results, with almost all of the 146 residents who tested positive showing no symptoms. Another test at a shelter in Worcester, Massachusetts also saw a similar, very high level of asymptomatic confirmed cases.

If those patterns hold true, they're a double-edged sword. They suggest that the virus is potentially harmless for many people. But they also show that transmission of the virus from healthy individuals to much more vulnerable people may be much harder to control, especially given the limited availability of testing in the U.S.

There are some caveats, as with everything related to COVID-19. The tests being used aren't always consistently accurate and can result in false positives and false negatives. And most of the instances mentioned above occurred among very specific populations — prison inmates, sailors, residents at a shelter. It's unclear if the populous at large would see similar rates of asymptomatic carriers of the coronavirus.

Still, the prospect that half or more of the people who contract the coronavirus wouldn't know they have it without testing is sobering. Health officials say it underscores the importance of what they do know for sure — that staying home whenever possible, wearing masks and gloves, observing six feet of physical distance from others in public and washing your hands frequently are vital means of slowing the spread of the pandemic.
© 2022 Cleveland Scene