On the heels of a frank admission by the mayor of Cleveland that the city, while sending separate trucks to pick up residents' curbside recycling, is actually dumping those cans, bottles and cardboard directly in the landfill alongside regular garbage, the Cuyahoga County Solid Waste District wanted to remind county residents who live anywhere but Cleveland that their recyclables are in fact still being sorted at separate facilities.

"There have been recent media reports about the issues with the City of Cleveland's recycling program and recyclable materials being landfilled," a Thursday morning press release read. "The Cuyahoga County Solid Waste District wants Cuyahoga residents to know that this situation pertains to the City of Cleveland only. Curbside recycling collected in the other 57 communities in the county are sent to three northeast Ohio material recovery facilities to be processed."

Municipalities are responsible for their own contracts.

The global market for recyclables has cratered in recent years, and where cities used to turn a profit on contracting with companies that would eventually send the materials to China, they now break even or simply pay to live up to the sorts of practices and promises necessary to take care of the environment and be something approaching a Green City on a Blue Lake.

Improper residential sorting directly contributes to part of the problem — driving up the price, complicating sorting, etc. That's not a uniquely local problem, and municipalities have been fighting to get residents to recycle properly so that the process is cheaper, easier, and more efficient.

Cleveland, it seems, can't seem to do it.

"The problems experienced by Cleveland were due in large part to residents not recycling properly," the Solid Waste District's statement read. "Proper recycling reduces the cost of recycling by reducing the amount of non-recyclable material that has to be removed from the marketable materials."

Which doesn't let the city off the hook. In fact, quite the opposite. If it's true, and it undoubtedly appears to be, that Cleveland residents aren't especially mindful of sorting their recyclables, then the city should help them. It should be transparent. It should, through its leadership, speak to residents — gasp — directly.

Education and outreach can help solve those problems and drive resident recycling rates to those seen in neighboring communities like Cleveland Heights, Chagrin Falls, Bedford, Garfield Heights and just about every other Cuyahoga County municipality except East Cleveland and North Randall.

Because no, it's probably not ideal nor a coincidence given who's in charge that the largest city in Northeast Ohio is third to last in its own county for recycling rates, according to the Solid Waste District's annual report in 2018. 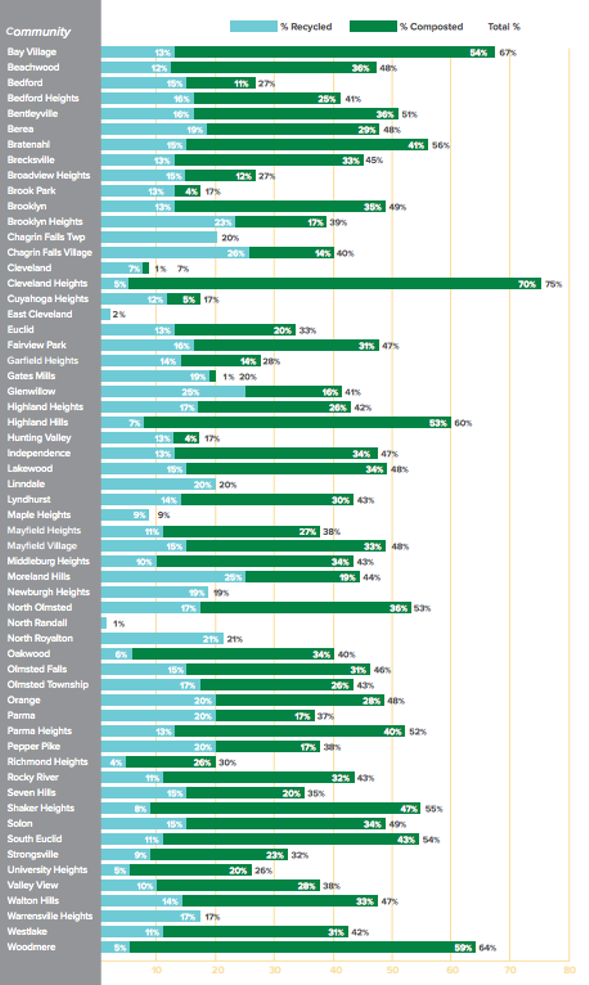 The Ohio statewide residential average, according to a 2018 EPA report, was 29.7%.

Cincinnati diverts (recycling + composting) at a 22.5% rate as of 2019 and Franklin County, home to Columbus, recycles at a 49.1% rate and is pushing hard through advocacy and education campaigns to hit 75% by 2032, if you're looking for statewide, big-city comparisons to Cleveland.

As we noted yesterday, to blame residents and pricing is a predictable but nevertheless sad abdication by city of its role and an admission that its environmental goals are important only when they're profitable.

"In a practical sense, there is no recycling," Jackson admitted.

In a practical sense, there is also no mayor.

Meanwhile, the Cuyahoga County Solid Waste District wants to remind Cleveland residents that "recycling is as important as ever," and that there are dropoffs for aluminum cans, mixed paper and cardboard throughout the city. Find a location here.

Below, the city's official explanation, a month after the fact, of what happened. 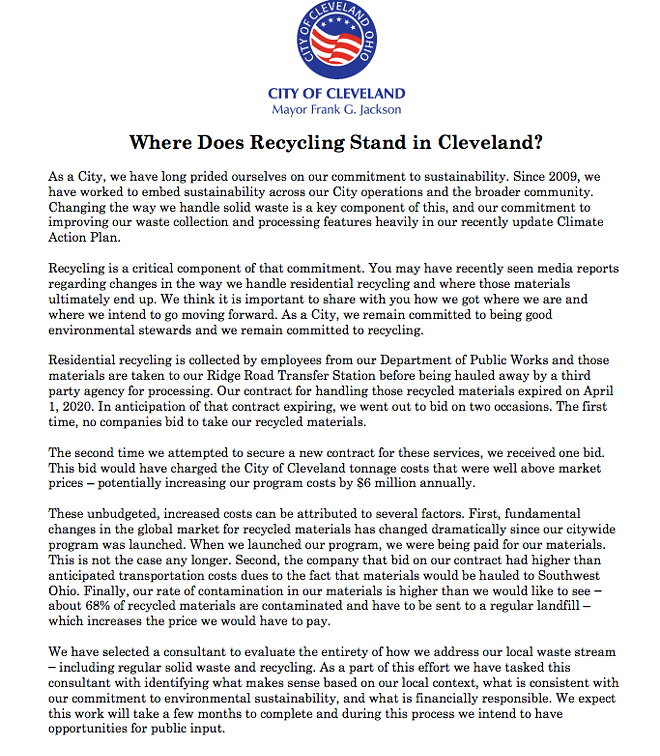