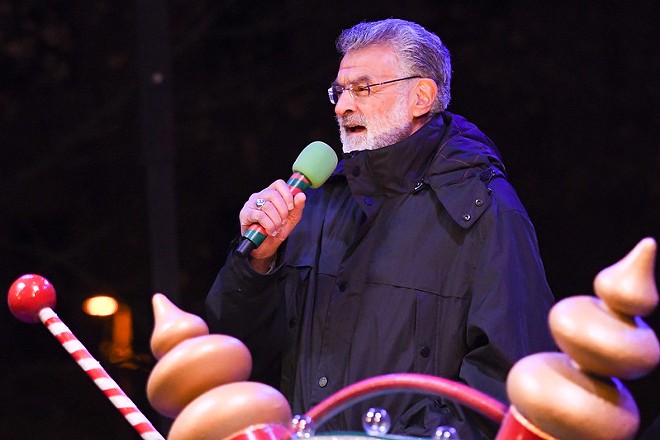 Destination Cleveland had long struggled with its current slogan – the rather self-explanatory “This is Cleveland” – finding it only useful to people who’ve driven to Buffalo by mistake.

By contrast, the mayor’s new slogan would finally give the city an identity like no other. Officials envisioned a flood of niche tourists drawn by the butthole imagery, from colon surgeons to sodomy enthusiasts to third grade boys. They were certain Cleveland would soon vault past Elkhart, Indiana to take the coveted 112th spot in America’s Top Summer Vacation rankings.

That hope has been in short supply over the decades, as the city ran through slogan after slogan, only to be sabotaged by bad luck and unforeseen circumstances.

The city’s 1990s campaign — “Cleveland: When You Can Only Afford a Half Tank of Gas” — brought a brief surge of visitors from Massillon and Ashtabula, but it was not to last. The agency then turned to flattery with such slogans as “Cleveland: Have You Lost Weight?” and “We Like What You’ve Done With Your Hair.”

When those too failed, the city launched “We Promise to Stop Telling You About Our World Class Orchestra,” only to discover that Harrisburg had promised the same back in 2004.

Even the viral campaign “We’re Not Detroit” failed to yield sustained visitors, since no one was planning to visit Detroit anyway.

That’s left Cleveland in a do or die position with its latest “Butthole of the World” crusade. So far, it’s been an exercise in tempered enthusiasm.

Destination Cleveland hoped to lure the Association of Colonoscopy Technicians’ convention away from San Diego, arguing that its slogan, “California’s Beach City,” doesn’t offer so much as a nod to buttocks-related imagery. Yet the group had already put down a deposit.

A Cub Scout troop from Shreveport excitedly wrote en masse about visiting the globe’s butthole, only to later write back that they were “not allowed.”

“We’re not giving up on Frank’s dream,” says Bilinski. “This is a legacy builder, like the time Mayor Ralph Perk set his hair on fire. Frank deserves to be mentioned in the same breath.”
© 2023 Cleveland Scene