Millions in Welfare to Save Cleveland's Downtown Hilton? It Should Be Our Honor 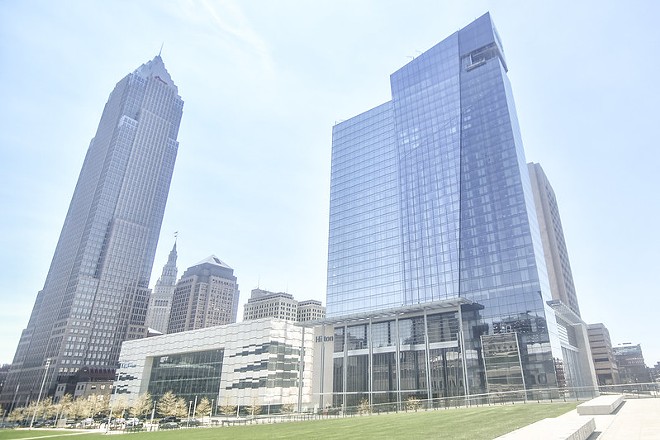 The news hit Cleveland like a gut-punch thrown by someone who watches a lot of Vin Diesel movies.

The Downtown Hilton was in trouble.

Due to a collapse in travel from the coronavirus, Hilton Worldwide was unable to make $7.9 million in debt and property tax payments on the iconic hotel. Were it to be saved, taxpayers would need to cover the tab.

It was a stark fall for a project that began with so much promise. In 2016, having already mastered the art of governance, Cuyahoga County deciding to bring its legendary management skills to the hospitality industry, opening the 600-room edifice.

The idea was to have it ready in time for the Republican National Convention, so that a majority-black city could host the nation’s largest gathering of lawn jockey collectors. Paired with the Huntington Convention Center and Global Center for Health Innovation, Cleveland would soon be catapulted to the heights of U.S. business travel.

That dream became true last year, when the city finally broke into the 50 Best Meeting Destinations list, trailing only such luminaries as Columbus and Grapevine, Texas to grab the 50th spot.

The Hilton wasn’t just a home away from home for the International Order of Shampoo Salesmen. It would also become the meeting place for Cleveland itself, where young lovers exchanged yearning glances over $18 old-fashioneds.
The deal was brilliant in its simplicity. Cuyahoga County would pay $276 million for the building. But it would be run by Hilton, which would reap all the rewards, with none of the risks. It was a win-win for everyone.

That’s no more evident than now, as the coronavirus batters the hotel industry. Hilton claims it can’t afford its $7.9 million payment. It offers no proof, since its occupancy rate is propriety information, as it should be. If North Korean intelligence services were to access sensitive Midwestern lodging information, who knows how the balance of global power might shift.

Besides, astute negotiators always take a corporation’s word at face value. The numbers bear this out. Last year, Hilton generated a meager $9.5 billion in revenue. To pay its Cleveland bill would mean tapping into .0008 percent of those revenues, clearly a sacrifice too great.

CEO Christopher J. Nassetta could also pay the bill himself. He made $21.3 million last year. But this would violate the first law of CEOing: That personal responsibility is always best left to someone else.

This leaves Cuyahoga taxpayers on the hook for yet another corporate welfare tab, one that could balloon to $20 million by the end of the year. Yet it’s only fair that residents be asked to subsidize one of the world’s great hoteliers. Yes, we too have been pounded by Covid. But our trifling struggles with luxuries like rent and medicine pale in comparison to the trauma being experienced at Hilton.

Sometime later this year, executives will fly to Maui for their annual retreat. There’s a very real chance they’ll run out of oysters at the Thursday night happy hour. Bob, the VP of Wallpaper & Sconces, will have to settle for smoked salmon rillettes.

If our sacrifice amounts to nothing more than keeping the crestfallen look from Bob’s face, it will be well worth it. For we are not monsters.
© 2023 Cleveland Scene