Doug Brown, Cleveland Scene
The Ohio National Guard is on Put-in-Bay today and tomorrow to test up to 1,000 island employees in conjunction with the Ottawa Health Department to get a better sense of how many cases they're dealing with.

This effort follows news that Put-in-Bay experienced an outbreak that left at least seven people infected in June and general trends that show rising infections in some states, including Ohio.

Masks are now mandatory in Level-3 counties, public health departments are reporting spikes not due to increased testing but from community spread of the virus, and various businesses and restaurants have temporarily closed after transparently announcing that staff members have tested positive for COVID-19. (Others, of course, have been less transparent.)

As for Put-in-Bay, which was the focus of headlines both because of the outbreak and because it generally represents a destination for folks whose behaviors run counter to widely-suggested safety and health guidelines, the Ottawa County Health Commissioner told the Sandusky Register that the state dispatched the National Guard to help because, “They found that our need was pretty important."

What's important to the Put-in-Bay Chamber of Commerce and the Island's Safety Task Force is that no one talk about what's happening, apparently.

In a message to business owners to be shared with their employees in advance of the dreaded PRESS descending on the island today and tomorrow, they were implored to "be mindful to refrain from discussing COVID-19 or other controversial issues with the media." 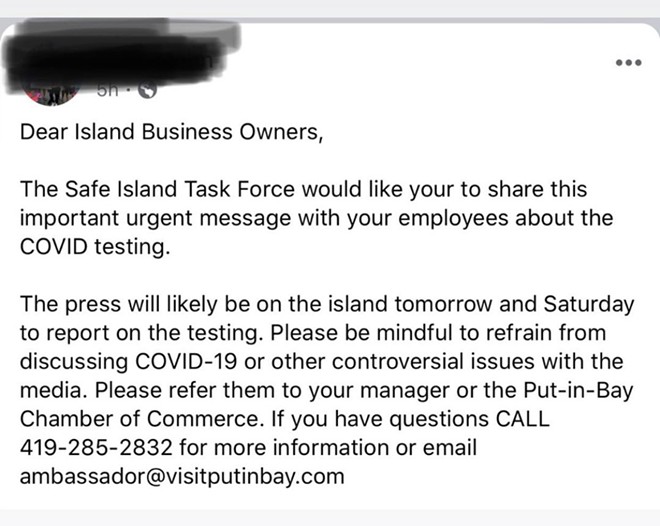 If we know Northeast Ohio media, that won't stop them from getting the story.

Either way, the testing will be helpful.