DeWine: Lawyers to Evaluate if Cincinnati Can Be Exempt From 10 p.m. Liquor Curfew After CPD Links it to Gun Violence 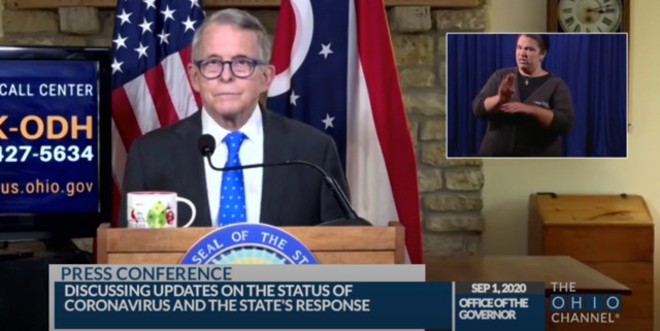 The City of Cincinnati has seen 355 shootings so far this year — a 49% increase from this time last year, according to police data — and 68 homicides.

And Mayor John Cranley and Cincinnati Police Chief Eliot Isaac are linking that uptick to fall-out from the coronavirus pandemic, and recently — specifically — the 10 p.m. liquor curfew enacted by Ohio Gov. Mike DeWine.

In order to slow the spread of COVID-19, DeWine and the Ohio Liquor Control Commission passed an emergency order at the end of July to ban the sale of alcohol at Ohio bars and restaurants — or any liquor-permitted establishments — after 10 p.m. Customers have until 11 p.m. to finish their drinks.

Chief Isaac wrote a letter to Mayor Cranley, which Cranley then shared with DeWine, connecting that curfew with recent gun violence, including that which occurred over the weekend of Aug. 14-16 — one of Cincinnati's most violent weekends in memory when at least 20 people were shot, five fatally, in several separate incidents.

“The City of Cincinnati has seen a rash increase in violent crime over the last several months. Many of the incidents have occurred at ‘after-hours’ gatherings such as short-term Airbnb rentals or public areas where citizens are gathering as alternatives to liquor-permitted establishments," wrote Isaac in the letter. "CPD has recognized the increase in these assemblies has coincided with the regulation implemented to slow the spread of COVID-19."

He said if this trend continues, "Cincinnati will experience its highest year of violent crime in at least a decade.”

In a press briefing today in which he addressed the recent spate of gun violence in the state, DeWine said Mayor Cranley had notified him of Cincinnati's concern with the 10 p.m. curfew.

“We believe that overall in the state it’s worked well, but we respect the mayor in Cincinnati — Mayor Cranley — and we respect the chief. They have described unintended consequences basically where people leave the bar because they can’t drink there anymore and they go off to a park or someplace else,” DeWine said.

He said the state's lawyers were skeptical about what they could do but they are researching whether or not they can exempt Cincinnati, and Cincinnati only, from the statewide curfew.

“Other mayors in Ohio, because I’ve specifically asked them — Mayor Ginther (of Columbus), Mayor Whaley (of Dayton), for example — have told me that they adamantly feel that the 10 o’clock shutoff of liquor is very important to their communities and their cities. So we are at this point consulting our lawyers to see, is it possible to carve out Cincinnati out of a statewide order?” DeWine said.

“We’re going to see what we can do for Cincinnati.”

Chief Isaac ended his letter, writing: “I am confident that easing the curfew restriction on our regulated establishments will temper the circumstances associated with our recent rise in violent crime due to after-hours gatherings.”
© 2023 Cleveland Scene