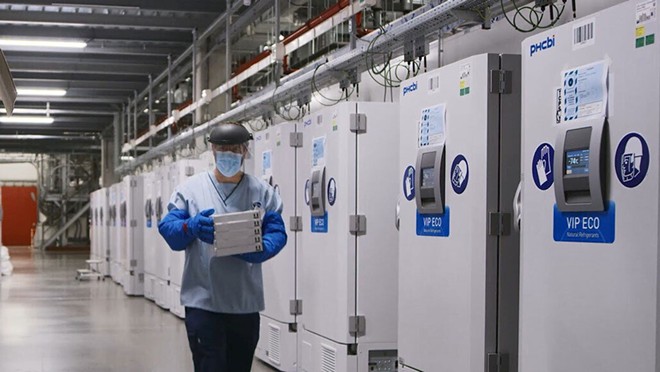 Pfizer
Pfizer is racing to get approval for its COVID-19 vaccine, applying for emergency use authorization from the U.S. Food and Drug Administration on November 20. But the pharmaceutical giant faces a huge challenge in distributing its vaccine, which has to be kept an ultrafrosty –70° Celsius, requiring special storage freezers and shipping containers.

It “has some unique storage requirements,” says Kurt Seetoo, the immunization program manager at the Maryland Department of Public Health in Baltimore. “We don’t normally store vaccines at that temperature, so that definitely is a challenge.”

That means that even though the vaccine developed by Pfizer and its German partner BioNTech is likely to be the first vaccine to reach the finish line in the United States, its adoption may ultimately be limited. The FDA’s committee overseeing vaccines will meet on December 10 to discuss the emergency use request. That meeting will be streamed live on the agency’s web site and YouTube, Facebook and Twitter channels.

The companies are also seeking authorization to distribute the vaccine in Australia, Canada, Europe, Japan, the United Kingdom and other parts of the world, making its deep-freeze problem a global challenge.

A similar vaccine developed by Moderna and the U.S. National Institute of Allergy and Infectious Diseases also requires freezing. But it survives at a balmier –20° C, so can be kept in a standard freezer, and can even be stored at refrigerator temperatures for up to a month.. Most vaccines don’t require freezing at all, but both Pfizer and Moderna’s vaccines are a new type of vaccine for which the low temperatures are necessary to keep the vaccines from breaking down and becoming useless.

So why does Pfizer’s vaccine need to be frozen at sub-Antarctica temperatures and Moderna’s does not?

Answering that question requires some speculation. The companies aren’t likely to reveal all the tricks and commercial secrets they used to make the vaccines, says Sanjay Mishra, a protein chemist and data scientist at Vanderbilt University Medical Center in Nashville.

But there are at least four things that may determine how fragile an mRNA vaccine is and how deeply it needs to be frozen to keep it fresh and effective. How the companies addressed those four challenges is likely the key to how cold the vaccines need to be, Mishra says.

The cold requirement conundrum starts with the difference in chemistry between RNA and its cousin, DNA.

One reason RNA is much less stable than DNA is due to an important difference in the sugars that make up the molecules’ backbones. RNA’s spine is a sugar called ribose, while DNA’s is deoxyribose. The difference: DNA is missing an oxygen molecule. As a result, “DNA can survive for generations,” Mishra says, but RNA is much more transient. “And for biology, that’s a good thing.”

When cells have a job to do, they usually need to call proteins into service. But like most manufacturers, cells don’t have a stockpile of proteins. They have to make new batches each time. The recipe for making proteins is stored in DNA.

Rather than risk damaging DNA recipes by putting them on the molecular kitchen counter while cooking up a batch of proteins, cells instead make RNA copies of the recipe. Those copies are read by cellular machinery and used to produce proteins.

Like a Mission Impossible message that self-destructs once it has been played, many RNAs are quickly degraded once read. Quickly disposing of RNA is one way to control how much of a particular protein is made. There are a host of enzymes dedicated to RNA’s destruction floating around inside cells and nearly everywhere else. Sticking RNA-based vaccines in the blast freezer prevents such enzymes from tearing apart the RNA and rendering the vaccine inert.

Another way the molecules’ stability differs lies in their architecture. DNA’s dual strands twine into a graceful double helix. But RNA goes it alone in a single strand that pairs with itself in some spots, creating fantastical shapes reminiscent of lollipops, hair pins and traffic circles. Those “secondary structures” can make some RNAs more fragile than others.

Yet another place that DNA’s and RNA’s chemical differences make things hard on RNA is the part of the molecules that spell out the instructions and ingredients of the recipe. The information-carry subunits of the molecules are known as nucleotides. DNA’s nucleotides are often represented by the letters A, T, C and G for adenine, thymine, cytosine and guanine. RNA uses the same A, C and G, but in place of thymine it has a different letter: uracil, or U.

“Uracil is a problem because it juts out,” Mishra says. Those jutting Us are like a flag waving to special immune system proteins called Toll-like receptors. Those proteins help detect RNAs from viruses, such as SARS-CoV-2, the coronavirus that causes COVID-19, and slate the invaders for destruction.

All these ways mRNA can fall apart or get waylaid by the immune system create an obstacle course for vaccine makers. The companies need to ensure that the RNA stays intact long enough to get into cells and bake up batches of spike protein. Both Moderna and Pfizer probably tinkered with the RNA’s chemistry to make a vaccine that could get the job done: Both have reported that their vaccines are about 95 percent effective at preventing illness in clinical trials (SN: 11/16/20; SN: 11/18/20).

While the details of each company’s approach aren’t known, they both probably fiddled slightly with the chemical letters of the mRNAs in order to make it easier for human cellular machinery to read the instructions. The companies also need to add additional RNA — a cap and tail — flanking the spike protein instructions to make the molecule stable and readable in human cells. That tampering may have disrupted or created secondary structures that could affect the RNA’s stability, Mishra says.

The uracil problem can be dealt with by adding a modified version of the nucleotide, which Toll-like receptors overlook, sparing the RNA from an initial immune system attack so that the vaccine has a better chance of making the protein that will build immune defenses against the virus. Exactly which modified version of uracil the companies may have introduced into the vaccine could also affect RNA stability, and thus the temperature at which each vaccine needs to be stored.

Finally, by itself, an RNA molecule is beneath a cell’s notice because it’s just too small, Mishra says. So the companies coat the mRNA with an emulsion of lipids, creating little bubbles known as lipid nanoparticles. Those nanoparticles need to big enough that cells will grab them, bring them inside and break open the particle to release the RNA.

Some types of lipids stand up to heat better than others. It’s “like regular oil versus fat. You know how lard is solid at room temperature” while oil is liquid, Mishra says. For nanoparticles, “what they’re made of makes a giant difference in how stable they will be in general to [maintain] the things inside.” The lipids the companies used could make a big difference in the vaccine’s ability to stand heat.

The need for ultracold storage might ultimately limit how many people end up getting vaccinated with Pfizer’s vaccine. “We anticipate that this Pfizer vaccine is pretty much only going to be used in this early phase,” Seetoo says.

The first wave of immunizations is expected to go to health care workers and other essential employees, such as firefighters and police, and to people who are at high risk of becoming severely ill or dying of COVID-19 should they contract it such as elderly people living in nursing facilities.

Pfizer has told health officials that the vaccine can be stored in special shipping containers that are recharged with dry ice for 15 days and stay refrigerated for another five days after thawing, Seetoo says. That gives health officials 20 days to get the vaccine into people’s arms once it’s delivered. But Moderna’s vaccine and a host of others that are still in testing seem to last longer at warmer temperatures. If those vaccines are as effective as Pfizer’s, they may be more attractive candidates in the long run because they don’t need such extreme special handling.