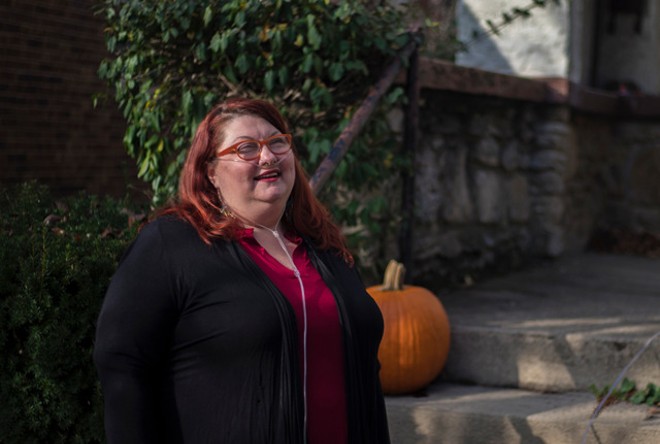 Christine Wilson’s first clue that something wasn’t right came when she couldn’t taste the birthday cake she baked for her son one day in mid-July.

A week later she was in the hospital battling pneumonia from COVID-19. The 47-year-old communications professional would spend 11 days at Good Samaritan Hospital in “surreal” isolation battling the novel coronavirus that continues to rage across Ohio and the rest of the United States.

As Wilson teetered on the cusp of needing ventilation — a measure that is something of a last resort for serious COVID patients — the mother of five received a dose of convalescent plasma from Cincinnati’s Hoxworth Blood Center. That plasma contained antibodies from others who had recovered from the virus. The next day, she received a second dose.

“There was a marked improvement after both days I took the plasma,” she says. “The best I can say is that it made me feel stabilized. I could tell I was heading in a better direction.”

Soon after, she was doing well enough to leave the hospital — though months later and COVID-free, the aftereffects continue to cast a heavy shadow on her day-to-day life. Wilson had to return to the hospital twice in the months after her initial visit, is still on oxygen and heavy doses of steroids to aid her breathing, and says she experiences neurological symptoms like numbness and tingling in her face and elsewhere.

“It makes me feel like I’m wearing someone else’s skin,” she says. “It’s a very unnerving feeling.”

Wilson’s post-COVID symptoms, likely caused by immune response, mirror those experienced by thousands of other so-called “long haulers” across the country.

They illustrate the long-term dangers of the novel coronavirus just as much as Wilson’s quick stabilization at the hospital seems to show the promise of convalescent plasma in treating it.

“The whole thing continues to feel precarious,” she says. “How I felt that day (I left the hospital) is how I feel now.”

The efficacy of the treatment Wilson received hasn’t been fully proven by clinical trials yet. But the U.S. Food and Drug Administration issued an Emergency Use Authorization this summer after initial studies suggested it was safe and could prove effective.

That authorization allows doctors and hospitals to request the treatment. Convalescent plasma was first used to treat COVID patients in China in February this year, and blood centers like Hoxworth have been administering it since April on a more limited basis for clinical trials.

Hoxworth Chief Medical Officer Dr. David Oh says initial data from studies like one conducted by the Mayo Clinic make him cautiously optimistic about the therapy’s effectiveness, especially given the lack of other treatment options. He is also encouraged by stories like Wilson’s.

“We hear anecdotal stories about this all the time, which is why I’m a proponent of use — that it was touch and go, and as they got close to getting on a ventilator they received the plasma and they made a really rapid turnaround,” he says. “It’s hard to attribute that all to convalescent plasma…but it’s a story we’re seeing repeatedly.” 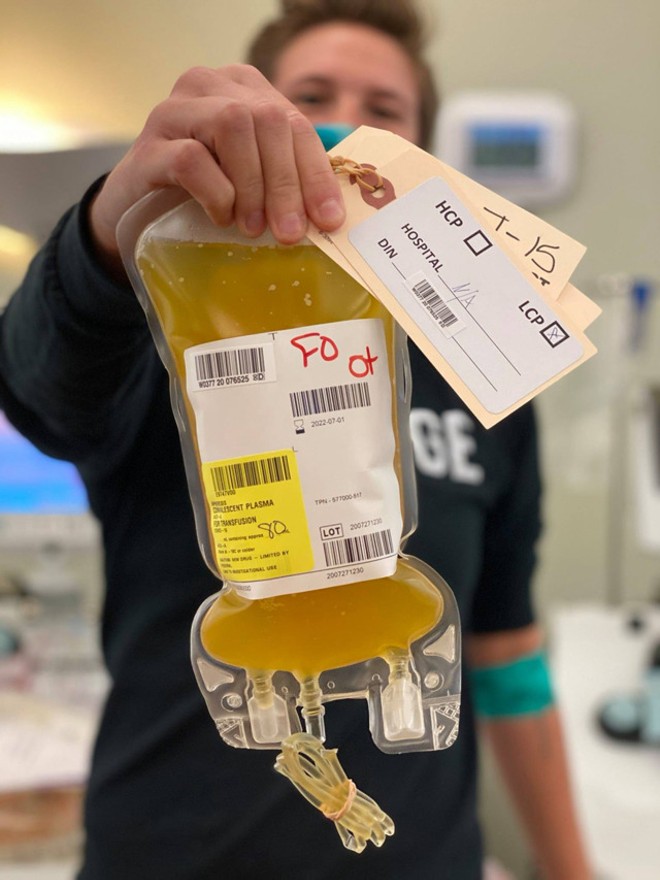 Courtesy Hoxworth
The treatment has also been used to fight other infections prior to the current pandemic.

“This is a therapy that has been around for over one hundred years,” Oh says. “There are reports of it being used for the flu of 1918, actually.”

An average donor can provide between one to three units of plasma. Each unit is about 200 milliliters.

Mohammed Alagha was the first COVID-19 plasma donor in Greater Cincinnati when he donated in mid-April. He has donated plasma five times since.

He contracted a mild case of COVID-19 while traveling on business in early March. After recovering, he had to wait 28 days before he could donate.

“It was a very easy process,” he says. “It takes about 45 minutes. I was scared the first time, but after I did it, I wanted to go back and donate more. I’m happy I did, because they use it for critical patients. You don’t know — it could save a grandparent’s life or a neighbor’s life. Who knows? Someday I may need it.”

Cincinnati emergency room nurse Lindsey Hayko has donated plasma five times since she caught and recovered from COVID in mid-March. Her case was relatively mild, but it did involve days of extreme fatigue, loss of taste and smell and a “chest-rattling” cough.

After Hayko recovered, a co-worker sent her an article about convalescent plasma. She donated in late March in Dayton and to Hoxworth in April.

“I think I was the second person in Ohio (to donate),” she says. “I donated to the Community Blood Center in Dayton. They were the first to do convalescent plasma in Ohio. When I did it, there wasn’t a lot of data saying whether it was helpful or not. But being a healthcare professional and everything, I felt it was part of my duty to help contribute to that research. It was like, if it works, great, if it doesn’t, we can move on to something else.”

Sometimes, the process of finding appropriate plasma is difficult. Wilson, for example, has a rare blood type. Her family had to start a social media campaign to find donors who had both recovered from COVID-19 and who had compatible plasma to give.

There are other complications for some looking to donate plasma. A controversial FDA policy requires men in same-sex relationships, or women who have had sex with a man who has also had sex with a man, to abstain from sex for 30 days before giving blood or plasma. Critics, including some blood centers, point out that this policy is discriminatory and that there is no reason for the delay — those in heterosexual relationship can also contract blood-borne sexually transmitted diseases and all donors are screened for blood-borne illnesses.

Until April of this year, the FDA directed gay men to abstain from same-sex sexual contact for a full year before donating. That restriction and similar ones for women who have had sex with a man who has also had same-sex sexual contact, as well as anyone who has received tattoos and piercings, were reduced to three months due to the COVID-19 pandemic.

Like blood centers around the country, Hoxworth says demand for plasma mirrors the arc of the pandemic’s impact on Greater Cincinnati.

Ohio has seen a skyrocketing increase in new COVID-19 cases in recent weeks.

By the end of November, the state had reported more than 410,000 cases and 6,399 deaths, including a record-high 11,885 new cases reported on Nov. 23 alone (Gov. Mike DeWine did say, however, this spike was partially due to a lab reporting delay).

Hamilton County had reported more than 32,000 cases by the end of November and more than 370 deaths.

Through September, Hoxworth was averaging about eight units of plasma a day for COVID patients. In the first two weeks of November, that number spiked to 50 units a day. Hoxworth supplies plasma to 31 hospitals in 19 counties, including all the hospitals in Cincinnati.

“The use has been really rapid recently,” Oh says. “We’ve been trying to increase our collections with this recent spike, which is so dramatic. We’re working to avoid shortages as much as possible.”

Wilson says she’s very thankful for convalescent plasma, which she credits with helping her defeat the COVID-19 virus. But she also thinks most people aren’t aware of the potential aftereffects of the disease, treatments or no.

Her family has even started a crowdfunding effort to help provide necessities.

“I’m a highly-functional human being,” she says. “I’m not sickly. But I’ve gone from someone who was hustling to someone who can only do things from her couch. It disrupts my whole family, my whole community. All we’re talking about is new cases. We’re not talking enough about the long haul.”
© 2022 Cleveland Scene